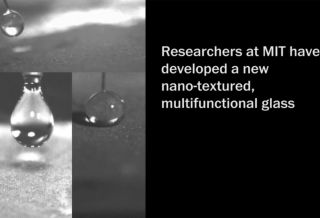 Tomorrow's world looks a bit brighter with MIT's new self-cleaning glass that is able to resist fogging and glare effects. Such technology could lead to smudge-free touch screens for smartphones and tablets, or even cleaner, nonreflective windows for car drivers.

The new glass eliminates reflections and repels water droplets like "tiny rubber balls" bouncing off the ground, according to MIT News. Its secret recipe consists of tiny surface features that resemble nanoscale cones — 1,000 times to 100,000 times smaller than the diameter of a human hair. If made inexpensively enough, the glass could end up in cameras, smartphones, televisions, solar panels, car windshields or even building windows.

"For the first time, as far as I am aware, this paper learns a lesson in manufacturing efficiency from nature by making an optimized anti-reflective and anti-fogging device," said Andrew Parker, a senior visiting research fellow at Oxford University’s Green Templeton College in the U.K. (Parker was not involved in MIT's work).

The researchers' nanocones appear fragile — inspired by natural surfaces such as lotus leaves —  but calculations show they can resist everything from raindrops in a strong downpour to wind-driven pollen, or even poking by curious humans. The work is detailed in a paper published in the April 8 online edition of the journal ACS Nano.

Such self-cleaning could give a huge boost to solar power alone — many solar panels can lose 40 percent of their energy efficiency within six months because of accumulated dust and dirt. Solar panels protected by the new glass could also avoid problems related to normal glass reflecting away useful sunlight.

The U.S. military may also have an interest in the future of self-cleaning, nonreflective glass. MIT's work was funded by the Army Research Office and the Air Force Office of Scientific Research, as well as Singapore's National Research Foundation and the Xerox Foundation.