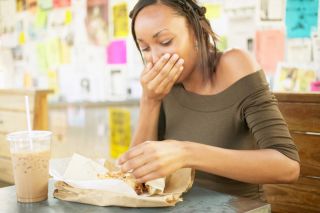 Nobody wants to find insect parts, rat hairs, mouse poop or maggots in their food. But the Food and Drug Administration does allows low levels of these nasty things along with a bunch of other icky stuff to be present in food, or the ingredients that go into it.

In fact, the FDA considers such things to be "natural or unavoidable defects," and the agency maintains a "Defect Levels Handbook" to describe the acceptable levels.

For more than 100 food items, from allspice to wheat flour, this booklet spells out the maximum allowable levels of "defects" that are permissible before the agency considers the food to be "adulterated."

For example, it's fine with the FDA for Americans to accompany their Thanksgiving turkeys with cranberry sauce containing an average of 15 percent mold filaments, based on a count made when samples of the sauce are viewed under a microscope.

Using a similar method to analyze samples, the list sets the upper limit of an average of 30 insect fragments in 3.5 ounces of peanut butter.

Although these imperfections in food sound positively disgusting, the handbook reassures consumers the defects "present no health hazards for humans."

"Food defects are not things that cause people to get sick," said Benjamin Chapman, a food safety specialist and associate professor at North Carolina State University at Raleigh. It's helpful to think of these substances as defects in food quality, he said, rather than as food contaminants, which are things like pesticides, metals (such as mercury and arsenic) or environmental chemicals like PCBs. Such contaminants are avoidable and could also potentially be a health hazard. [Top 7 Germs in Food that Make You Sick]

Defects in food are "yuck factors, but they're not really a food safety issue," Chapman told Live Science.

As a food safety specialist, Chapman said he isn't worried about yuck factors. He is more concerned about foods that contain disease-causing organisms, such as Salmonella or E. coli. Such organisms result in an estimated 48 million cases of foodborne illness in the United States each year, according to the FDA.

But although it's gross that canned tomatoes may average up to 10 fly eggs, the food isn't likely to make you sick. Nor is that half a cup of frozen spinach that might contain up to 50 teensy bugs and pests, including aphids, thrips or mites.

The FDA allows two-thirds of a cup of raisins to have an average of 40 milligrams or more of sand and grit. The agency draws the line at an average of 20 maggots in canned mushrooms.

Before grabbing a snack, keep in mind that 6 percent or more of potato chips by weight may contain rot. But only 5 percent of prunes in a sample can be "rejects," meaning they are "insect-infested, moldy or decomposed, dirty and/or otherwise unfit."

Although the FDA has established these acceptable levels for such defects, and could take action if a food exceeded those levels, Chapman told Live Science the actual levels found in foods are "much, much lower."

He pointed out that most food companies typically set their own quality-control standards that are far stricter than the FDA limits. Companies' consumer-relations staffs would likely hear from unhappy customers and the companies would lose business if their raisins, for example, contained visible dirt or insect parts.

The FDA's handbook, which was released in 1995 and last updated in 2005, is a fun read. A person can find out acceptable levels of "foreign matter" allowed in food, which is FDA-speak for a group that includes "objectionable matter such as sticks, stones, burlap bagging, cigarette butts, etc." The listings also describe permissible limits for "insect filth," "rodent filth," "mammalian excreta," insect parts, flies, mold, rot, pits, sand and grit.

The FDA explains the source of such defects, too, such as whether they may have been introduced before, during or after the food was harvested, or during its processing. The agency also defines the defects' significance to consumers, such as whether the imperfections affect the food's looks or cost, or may hurt someone who eats it (for example, pits in olives might injure a tooth).

At this point, people might be wondering, "What the heck are these things doing in my food?"

The handbook puts it this way: "The FDA set these action levels because it is economically impractical to grow, harvest or process raw products that are totally free of nonhazardous, naturally occurring, unavoidable defects."

As Chapman explained it, given the large amount of food that is produced daily in the United States, it's really difficult to not have some materials make their way into the finished product. These "defects" exist in the environment where foods come from, and it's just not practical to remove all non-hazard-causing defects, he said. For example, spinach is grown outdoors, where aphids live.

The handbook makes for a good discussion or entertainment, Chapman said, but "if these things were harmful to consumers, they would have been regulated."