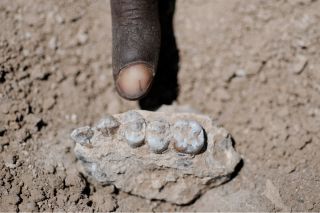 The holotype upper jaw of Australopithecus deyiremeda found on March 4, 2011, in the central Afar region of Ethiopia.
(Image: © Yohannes Haile-Selassie)

A newfound humanlike species may be another contender for the ancestor of the human lineage, researchers say.

This ancient relative of humanity coexisted alongside the famous Lucy about 3.4 million years ago, revealing that a diversity of such humanlike species once lived together, scientists added.

The oldest known member of the human lineage, genus Homo, dates back to about 2.8 million years ago. Before humans evolved, researchers had long thought there was little or no diversity among the hominins, which include humans and related species dating after the evolutionary split from the chimpanzees.

The best-known hominin that lived before the evolution of humans was Australopithecus afarensis from eastern Africa, which lived between 2.9 million and 3.8 million years ago, and which included the famous Lucy. Scientists have long argued that later hominins might have evolved from this species.

Still, fossils unearthed in the past two decades have suggested that Lucy might not have been alone, as was previously thought. For instance, one research team suggested that a 3.6-million-year-old partial lower jaw from Chad belonged to a species the researchers named Australopithecus bahrelghazali. Another group of investigators said pieces of skull dating back 3.4 million years and found in Kenya belonged to a species the scientists named Kenyanthropus platyops. However, whether or not these fossils actually belonged to new species has been hotly debated.

Now scientists have discovered a new hominin species they named Australopithecus deyiremeda that lived in Ethiopia 3.3 million to 3.5 million years ago, coinciding with Australopithecus afarensis. The researchers say these findings confirm that multiple species of hominins coexisted during this time. [See Images of the Newfound Hominin Fossils]

"Previously, Lucy's species, Australopithecus afarensis, had no contender as the ancestor of all later hominins that evolved after 3 million years ago,"study lead author Yohannes Haile-Selassie, curator and head of physical anthropology at the Cleveland Museum of Natural History, told Live Science. "Now the new discovery clearly shows that it was not the only probable ancestor. There are many potential candidates for that ancestry."

The species name "deyiremeda" (day-ihreme-dah) means "close relative" in the language spoken by the Afar people who live in the area of the discovery. The fossils were discovered in 2011 at a location only about 30 miles (50 kilometers) from sites of similar age where scientists have unearthed abundant specimens of Au. afarensis.

"The region is hot and dry today," Haile-Selassie said. "You don't see a lot of life other than the local Afar people and their goat and camel herds."

The fossils include teeth, a partial upper jawbone and two lower jawbones. The size and shape of the teeth suggest they belong to Australopithecus, but many other features suggest the fossils belong to a new species within that genus. For instance, compared with Au. afarensis, the newfound remains showed thicker lower jaws and thicker tooth enamel.

The scientists detailed their findings in the May 28 issue of the journal Nature. [Image Gallery: Our Closest Human Ancestor]

Previous research suggested that when Au. deyiremeda was alive, the area possessed riverbank forests. "We have found fossils of monkeys, primitive relatives of horses, pigs, and small mammals such as rats and mice, among many other animals associated with the new species," Haile-Selassie said. "We don't know for sure what it ate. However, it may have been a good meal for all of the larger carnivores, such as hyenas and lions."

It remains uncertain what led to such diversity of hominins in eastern Africa during this time. However, "because the new species has thicker enamel on its teeth and also had robustly built lower jaws, it was probably consuming harder, tougher and more abrasive dietary resources compared to the contemporaneous species, Australopithecus afarensis," Haile-Selassie said. "Therefore, their foraging strategies may have been different and avoided competition for the same resources."