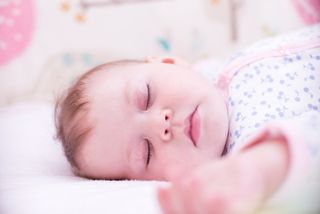 Babies who live at high elevations, those above 8,000 feet (2,438 meters), may face a slightly increased risk of Sudden Infant Death Syndrome, or SIDS, new research finds.

But researchers urge parents not to panic about the new findings.

"The absolute risk [of SIDS] remains very low, and … this is in no way a call to abandon residence [in] or visits to high-altitude" locations, said study researcher Dr. David Katz, a cardiologist at the University of Colorado Denver.

But the research does suggest that low oxygen levels might play a role in SIDS — and that finding could hint at the cause of tragic, unexplained infant deaths.

SIDS is defined as the unexplained death of a seemingly healthy baby under the age of 1 year, typically during sleep. No one knows what causes SIDS, though some data suggests that babies who die of SIDS may have subtle brain-stem abnormalities that prevent them from rousing when their oxygen levels drop.

In the new study, Katz and his colleagues gathered data from birth certificates and death certificates for all births and deaths in Colorado between 1990 and 2012. The state has the highest elevation, on average, of any state in the United States, with elevations ranging from 3,315 feet (1,010 m) above sea level to 14,433 feet (4,399 m), the researchers said.

The researchers controlled for a slew of demographic and social factors, including infant health and breastfeeding status, whether the baby's mother smoked during pregnancy, and parental age, race, education and socioeconomic status.

"At higher altitude, there is greater absolute risk of SIDS," Katz told Live Science. Cities at above 8,000 feet in Colorado include ski towns such as Vail, Winter Park and Breckenridge, as well as mountain towns such as Leadville, Silverton and Fairplay.

The researchers emphasized that even at high elevations, the risk of SIDS is still low. Even above 8,000 feet, a baby's chance of dying of SIDS is only 0.079 percent.

And the researchers found good news: The Back to Sleep campaign worked equally well at high elevations as it did at low elevations. So, putting babies on their backs to sleep, as challenging as that can sometimes be, can lower SIDS risk across the board.

"I think it's important to point out that parents can still focus on modifiable risk factors for sudden infant death syndrome, including putting infants on their back to sleep, avoiding excessive blankets or stuffed animals, and maintaining a no-smoking environment," Katz said.

"I would like parents to feel that they're empowered to take some very concrete steps to minimize risk of SIDS wherever they live," study co-author Dr. Susan Niermeyer, a professor of pediatrics at the University of Colorado School of Medicine, told Live Science. Breastfeeding and sleeping in the same room as an infant can also reduce SIDS risk, she said.

If their babies object to back-sleeping, parents can be reassured that once a baby is strong enough to roll onto his or her own stomach, parents don't need to keep flipping the baby back over all night.

"If they're able to turn over, they're probably going to have the motor development to get themselves out of a situation where they have an obstructed airway," Niermeyer said.

She did recommend that parents take caution in traveling to high elevations during the first month or two of an infant's life, but not because of SIDS. Just like adults, she said, babies can come down with altitude sickness because of the lower density of oxygen in thin mountain air.

The researchers emphasized that their study was observational, so researchers can't be sure why elevation and SIDS appear to be linked. "I'm going to resist the urge to speculate," Katz said.

But the hypoxia of high elevation is a useful way for researchers to explore the potential causes of SIDS in experimental or animal studies, Niermeyer said. It's possible that lower oxygen levels affect the prenatal development of the nervous and respiratory systems, or that there are effects after birth, she said.

The researchers published their findings today (May 25) in the journal Pediatrics.