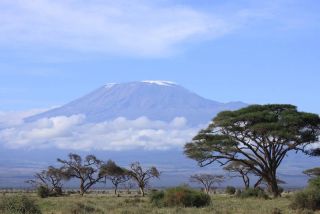 On his 27th birthday, David Hillebrandt and his wife Sally began to climb Mount Kenya, the second-highest mountain in Africa after Kilimanjaro. Instead of gearing up and heading straight for the mountain's tallest peak—which reaches 5,199 meters—the couple started their journey more leisurely, trekking through scenic ridges and valleys around the mountain at an altitude of about 3,000 meters.

David, who today serves as a medical advisor to the British Mountaineering Council, already had considerable climbing experience at the time: he had scaled a 5,790-meter peak in Pakistan and 3,960-meter peaks in the European Alps. Sally, in contrast, had never done any serious climbing and did not consider herself a mountaineer.

But Sally wasn't the one who needed to stop and turn around.

"I am meant to be this tough, rugged mountaineer," David says, "and I celebrated my birthday by throwing up all over the place." Plagued by a throbbing headache and relentless nausea, David retreated to lower ground. He knew from previous climbs that he was prone to altitude sickness, but he thought circling the mountain at 3,000 meters would be a good way to acclimatize. This time it didn't do the trick. Even though she was a far less experienced climber, Sally adjusted to the altitude much faster.

It wasn't experience that made the difference—it was genetics. Scientists have known for a while that some people are inherently more susceptible to altitude sickness than others—and that this susceptibility is heritable—but only now are they on the trail of the culprit genes. Preliminary studies suggest that a group of six genes predicts who will get altitude sickness with greater than 90 percent accuracy. Such a precise genetic test would greatly benefit the military, which currently has no way of predicting which soldiers will fall ill when flown to high altitudes and would rather not waste money on expensive acclimatization drugs. In a parallel research effort, scientists have been searching for the genes that determine which cows develop altitude sickness, also known as brisket disease, when they graze in the Rocky Mountains. Because tens of thousands of cows die in the western U.S. from brisket disease annually, ranchers would like nothing more than to strip the responsible genes from the breeding population.

The pursuit of a genetic test for altitude sickness began in earnest a few years ago in Robert Roach's laboratory at the University of Colorado. In 2010, 28 people in Roach's lab ascended to an altitude of 4,875 meters without ever leaving the ground. Roach placed his volunteers in a large metal box called a hypobaric chamber and gradually sucked out air with a vacuum pump, reducing atmospheric pressure to mimic a high altitude, low-oxygen environment. Roach purposefully recruited a mixture of people who were susceptible to altitude sickness and people who had never had problems in high climes. As expected, about half of the 28 volunteers felt sick in the chamber, whereas the others felt fine.

Roach took samples of his volunteers' blood, isolated their DNA and programmed a computer to search for genetic differences between the people who got sick and those who didn't mind hanging out in thin air. The program identified six genes that are expressed at unusually high or low levels in people who felt sick; some of the genes are linked to oxygen transport. Looking at the expression levels of those six genes alone was enough to distinguish people who became ill from those who did not with about 95 percent accuracy.

The following year, Roach collaborated with Benjamin Levine of the University of Texas Southwestern Medical Center to try the rudimentary genetic test on a larger group of volunteers. This time, instead of bringing the mountain to his lab, Roach decided to move his lab to the mountain.

In groups of about 15, Roach and Levine took 140 fit men and women from Dallas to Mount Baldy in Breckenridge, Colo., which is around 4,000 meters above sea level. During their weekend mountain getaway, the volunteers in each group—all of whom had passed the Army Physical Fitness Test—ran 3.2 kilometers, did push-ups and sit-ups, and hiked a trail as fast as they could. A few days earlier, everyone in the group had performed the same exercises at sea level. Altitude made all the difference. "We had some serious athletes in our group, a lot of triathlon people," says Tom Tielleman, 24, a former Eagle Scout. "Everyone did worse on the mountain." Some people did worse than others.

Currently, Roach and Levine are analyzing DNA from the Breckenridge study, searching for the same six genes that Roach identified in the hypobaric chamber study as well as looking for new genetic patterns that discriminate between people whose performance decreased slightly on the mountain and those whose performance worsened dramatically. If they find a strong signature, Roach predicts that they will develop a working genetic test for altitude sickness within a year. The Pentagon, which funds some of Roach's research, wants an easy way to identify soldiers who succumb to altitude sickness when fighting in mountainous regions.

In many cases, the symptoms of altitude sickness are mild and dissipate after a few days. But for some people altitude sickness is not just a minor inconvenience—the headaches, nausea and vomiting are debilitating, making it difficult to stand up or think clearly, let alone fight a war. Some people cough up blood and retain fluid in their lungs as the pressure inside capillaries increases, forcing out water. The U.S. Army Research Institute of Environmental Medicine estimates that above 3,000 meters between 25 and 35 percent of soldiers yield to altitude sickness; above 4,000 meters, between 80 and 90 percent of soldiers fall ill. Although there are effective drugs like Diamox (acetazolamide) to prevent and treat altitude sickness, buying drugs in mass quantities for an unknown number of soldiers is expensive and wasteful, and some drugs have unwanted side effects such as blurred vision and excess blood acidity. A genetic test would not help treat altitude sickness, but it would help military leaders strategize, giving the soldiers most likely to get sick more time to acclimatize and thereby reducing the number of medical evacuations.

Altitude sickness is also the scourge of entirely different population of mountain-dwellers: cows. By the time a rancher spots one lumbering up and down the mountain, its swollen chest sloshing between its front legs, there is not much he can do except move the animal to a lower altitude and hope it lives. Every summer in the U.S. West—when ranchers take cattle to graze on grassy mountain slopes—tens of thousands of cows die because they cannot adapt to the thin, oxygen-poor air. For the past two years, scientists collaborating with a new research facility at New Mexico State University (N.M.S.U.) in Las Cruces have been searching for the genes that determine which cows develop high altitude sickness, aka brisket disease. Once they find the genes, the idea is to breed them out of the bovine population.

From May to November each year, ranchers in many parts of the western U.S. take their cattle into the mountains where there is more rainfall and more nutritious grass than at lower altitudes—lower oxygen levels notwithstanding. In the Rockies, summer pastures range from 1,500 to 3,650 meters; an altitude greater than 1,500 meters is enough to induce brisket disease. In some parts of Montana and Colorado, cattle graze at altitudes upward of 4,000 meters, says Manny Encinias, director of N.M.S.U.'s Top of the Valle research facility in Valles Caldera National Preserve.

Whereas some cows take the swift transition to high altitudes in stride, others swell up and die. Not all breeds are equally susceptible, nor are all individuals from a single breed—just as human susceptibility to acute mountain sickness varies. Healthy cows respond to low-oxygen environments in a characteristic way: their hearts beat faster to deliver enough oxygenated blood to the body and brain, and blood vessels in the lung constrict to shunt blood to the organ's oxygen-rich areas. Cows that develop brisket disease respond similarly, but their body's compensation is too aggressive for their own good. Blood pressure increases so much that plasma seeps out of the blood vessels into tissues surrounding the heart and lungs, bloating the cows' chests. And blood vessels in the lung constrict so much that the blood backs up into the heart, which eventually gives out. The cows collapse and die from heart failure.

At Top of the Valle, which is nearly 2,600 meters above sea level, researchers are working to pinpoint the exact genes responsible for the physiological differences between a cow that keels over in the mountains and one that remains as lively as Julie Andrews in the Alps.

Ranchers in New Mexico, Texas, Colorado and Utah send their cows to N.M.S.U., where Tim Holt of Colorado State University in Fort Collins slides a catheter through their jugular veins toward their hearts and measures arterial pressure—an indicator of the cow's susceptibility to brisket disease. If tests suggest the cow won't fare well in the mountains, a rancher may avoid a potential loss by selling the cow to a lower-altitude ranch. "It's almost a given that ranchers will lose between 5 and 30 percent of their herd if they send cattle to high country—that's of great economic significance," Holt says. N.M.S.U. says the beef industry loses $60 million annually to high altitude disease. Some ranchers have considered giving cattle drugs designed to treat mountain sickness in people, like acetazolamide, but the FDA has not approved the use of such drugs in animals meant for human consumption.

Even if N.M.S.U. tested all of the nearly one million cows grazing in the Rockies for pulmonary hypertension—high blood pressure in the lungs—it wouldn't solve the brisket problem. When ranchers purchase bull semen for artificial insemination—the most common breeding practice in the Rockies—there is no way to know if the semen contains the undesirable genes responsible for brisket. Furthermore, ranchers risk reintroducing those genes into a population they have already worked to make mountain-friendly through generations of artificial selection. By identifying the responsible genes, scientists give ranchers a way to screen bulls for those genes and eliminate the problem of genetic recontamination.

"If you raise a bull at sea level, you can't figure out his genetic predisposition to high altitude sickness without taking him above 5,000 feet. Our ultimate goal is to take a DNA sample and generate a value: either a concrete 'Yes or No' or a numerical value of genetic merit," explains Jonathan Beever of the University of Illinois at Urbana–Champaign. Beever receives blood samples from N.M.S.U., the DNA in which he analyzes.

"There's always been theories about which breeds and animals are more susceptible," Encinias says. "Now we are trying to objectively quantify it."