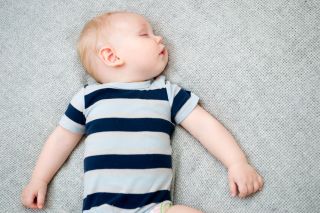 A public health campaign to place babies on their backs to sleep has reduced the incidence of SIDS by 50 percent since 1992.
(Image: © Viacheslay Lopatin | Shutterstock)

Sudden infant death syndrome (SIDS), sometimes called crib death, is the sudden and unexpected death of a child younger than age 1 that cannot be explained by other causes. It is the leading cause of death of children ages 1 to 12 months, according to the Centers for Disease Control and Prevention. In 2010, more than 2,000 U.S. infants died from SIDS. The National Institutes of Health reports that SIDS is most likely to occur when the baby is between 2 and 4 months old. The incidence increases in cold weather. Infants who die of SIDS show no signs of suffering.

The exact cause of SIDS is not known, and researchers now suspect that many factors act together to increase the risk of SIDS. According to the NIH, factors include:

To prevent SIDS, the American Academy of Pediatrics recommends the following:

The National Institutes of Health also suggests that mothers breastfeed their babies, which reduces some of the upper respiratory infections that may impact SIDS development. Additionally, parents should be careful not to give honey to children younger than 1 year old. Having honey may cause infant botulism, a severe but treatable illness in which babies suffer from muscle weakness and breathing problems, and that may be associated with SIDS.