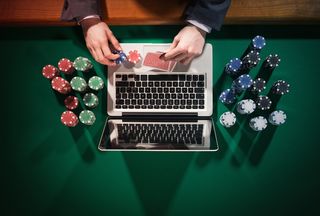 Computers have already succeeded in beating humans at chess and Jeopardy! Soon, they may add poker to that list.

Earlier this month, several of the world's best poker players faced off against an artificial intelligence (AI) program called Claudico at a game of Heads-Up No-Limit Texas Hold 'em at Rivers Casino in Pittsburgh. After two weeks of competition and 80,000 hands, the human players won more chips than the AI, but not enough to pass the threshold needed to be considered scientifically valid.

"I am guessing [a poker-playing AI] will be stronger than the best humans in the world in one to five years," said Tuomas Sandholm, a computer scientist at Carnegie Mellon University in Pittsburgh, who led the team that created Claudico. But even as AI ability gets closer and closer to that of the best human players, it will take many more poker hands in order to truly declare the program victorious, Sandholm said.

One of AI's best-known achievements occurred when IBM's chess-playing Deep Blue computer beat reigning world champion Garry Kasparov. But unlike chess, poker is a game of incomplete information; players do not have knowledge about the payoffs and strategies of the other players. "Poker is much more relevant for the real world than chess," Sandholm told Live Science.

One of the most important strategies in poker is the art of bluffing, in which a player makes or raises a bet without having the best hand, in order to fool an opponent into folding. "People often think about bluffing as being a psychological phenomenon," Sandholm said. But beyond psychology, "bluffing still emerges as a strategic phenomenon," he said.

Sandholm and his colleagues didn't pre-program Claudico's poker strategy. They wrote algorithms that automatically compute a strategy by trying to find the Nash equilibrium. This concept from game theory was developed by American mathematician John Nash, who was portrayed in the film "A Beautiful Mind." In a noncooperative game, players are said to be in Nash equilibrium if they are making the best decision possible, taking into account the decisions of the other players.

Claudico's poker ability may be impressive, but Sandholm and his colleagues didn't develop the AI just to excel at a card game, they said. The same abilities that make Claudico good at poker can be applied to everything from auctions to cybersecurity. For example, Sandholm and his team developed a similar AI program to figure out which frequencies and energies the military should use for wireless communication in order to avoid signal jamming by an enemy.

When it comes to solving problems with incomplete information, "poker is a great bench mark," Sandholm said.