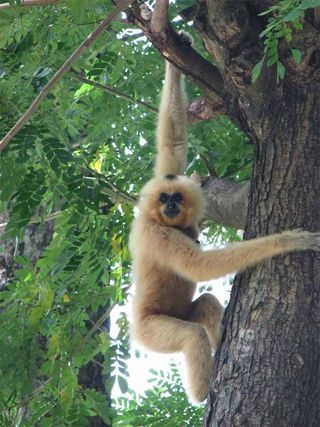 Bushmeat, or wild-animal game, has long been a food source for people who live in African forests and hunt apes, antelopes and other animals for subsistence. But in recent decades, commercial hunters have started to empty out the forests, especially of primates.

So the bushmeat issue has become a vexing one. On the one hand, researchers warn that some Central African wildlife species will become extinct within 50 years unless the hunting of wild animals is controlled.

Researchers estimate that the current harvest of bushmeat in Central Africa amounts to more than 1 million tons annually — the equivalent of almost 4 million head of cattle.

On the other hand, humans have needs too, and bushmeat currently provides up to 80 percent of the protein and fat needed in rural diets in Central Africa, a region that is rife with poverty, according to a newly released report by the Center for International Forestry Research (CIFOR), the Secretariat of the Convention on Biological Diversity (CBD) and partners.

"People that eat bushmeat or sell bushmeat to pay for medicines or school fees of their children, should not be presented as 'criminals,'" said Nathalie Van Vliet, an associate expert for CIFOR in Cameroon.

The conclusion of the report, "Conservation and Use of Wildlife-Based Resources: The Bushmeat Crisis," might take some by surprise. It advocates for legalized hunting of rodents and small antelopes instead of a total ban on all bushmeat hunting.

"The [bushmeat] problem is complex," said Van Vliet, who didn't work on the report, but helped to collect data that served as the basis for it.

"It needs to be carefully explained to the public so as to sensitize about the need for conservation," she said, "but also to point out the cultural value of bushmeat and the livelihood importance of hunting."

The legality of bushmeat hunting varies by species and region, and not all of the hunted species are endangered. The solution to the bushmeat crisis, according to the report, includes policies that protect endangered species but also allow sustainable hunting of game such as rodents and duikers, a type of small antelope, since there is no clear substitute available if common wild meat sources were to be depleted.

Large mammal species are particularly vulnerable to hunters and poachers (illegal hunting is called poaching). Elephants, gorillas and other primate species have already become extinct in some locales, the report states, while fast-reproducing species that thrive in agricultural environments — such as duikers or rodents — may prove more resilient.

The report appeals for a coordinated policy response to the crisis at the local, national and international levels, but warns that blanket bans on hunting and trade that don't discriminate between specific local contexts and species are bound to fail.

"Involving local communities in the process is the big challenge. If this is achieved, then I think there is hope for our primates," Van Vliet said.

As it stands, the report warns that an upsurge in hunting bushmeat — including mammals, birds, reptiles and amphibians — in tropical forests is unsustainable and that it poses serious threats to food security for poor inhabitants of forests in Africa.

"People in Central Africa have been hunting for centuries, yet without depletion of the most common species. The alarm about the dramatic levels of over-hunting has already been raised about 20 years ago, but large amounts of carcasses continue be sold in urban markets of Central Africa," Van Vliet told LiveScience. "On the other hand, there is also evidence that hunting can also lead to un-reversible effects on specific mammal species’ populations," she said.

The report was published by CBD and CIFOR, one of 15 centers supported by the Consultative Group on International Agricultural Research.

Local, national and regional trade in bushmeat has become a significant part of a "hidden economy," the report states. Overall, international trade in wild animal products has an estimated value of $3.9 billion, said Robert Nasi of CIFOR, an author of the report. Bushmeat is also an issue in the tropics of the Americas and Asia.

The report notes that it is important to make a clear distinction between commercial entrepreneurs, who engage in what they know to be an illicit activity, and poor rural people, for whom bushmeat represents animal protein and a cash-earning commodity.

"If local people are guaranteed the benefits of sustainable land use and hunting practices, they will be willing to invest in sound management and negotiate selective hunting regimes," said Frances Seymour, director general of CIFOR. "Sustainable management of bushmeat resources requires bringing the sector out into the open, removing the stigma of illegality, and including wild meat consumption in national statistics and planning."