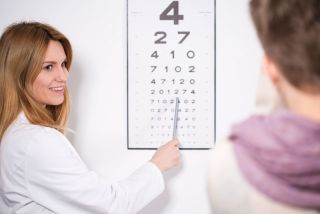 Baseball players typically have sharp eyes to start, but by spending a total of 12 hours training their eyes to spot contrast, they can improve that vision to about 20/7.5, said Aaron Seitz, who runs the Brain Games Center for Mental Fitness and Wellbeing at the University of California, Riverside. That would mean they could clearly see something at 20 feet away (6.1 meters) that mere mortals could only make out from a distance of 7.5 feet (2.3 m).

Even when catching balls flying through the air at lightning speed, "some said they could see the stitching on the ball and the direction of spin," Seitz said here at the NeuroGaming conference last week (May 6).

Though 20/20 is sometimes called "perfect" vision, people can actually do much better than that. Baseball players tend to have extraordinary vision — in fact, one of the greatest baseball players in history, Babe Ruth, was thought to have 20/8 vision, Seitz said. That type of super sight plays an important role in helping players figure out where the ball is going, and can provide a critical edge in high-level gameplay, Seitz said.

To see if brain training could improve not only vision but also playing ability, Seitz and his colleague Jenni Deveau, director of research at the Brain Game Center, subjected 17 of the UC Riverside Highlanders baseball players to daily 25-minute sessions over the course of a month. As a control, the pitchers on the team did visual assessment tests but were not given the training.

During the training, the team had to distinguish the shape of a so-called Gabor patch, in which a circle is made out of a grating with light and dark colors. The patches have been shown to strongly stimulate the brain cells responsible for visual perception, Deveau told Live Science. (Scientists believe that the brain processes visual stimuli at its most basic level by detecting and interpreting the contrast levels between adjacent pixels, so the researchers think the task is honing the brain's vision processing ability, Deveau said.)

As the players' ability to distinguish the contrast improved, the contrast in the grating got fainter and the task got harder. At the end of the task, the players' eyesight had improved by about 30 percent on a visual acuity test, and many of them reported subjective improvements in their vision, Seitz said.

While super vision may be feasible for high-level athletes, they probably won't be able to get much better than about 20/7 vision — the limit of what the eye's hardware can probably process, Deveau said.

And although the training would likely work for anyone, people who, can't find their glasses in the morning if they don't already have them on their face, are unlikely to see much use for it. That's because the training doesn't improve the eye's optics, which are largely the cause of nearsightedness and farsightedness, Deveau said.

"We can expect a one- to two-line difference on an eye chart, so that depends on where you start," Deveau told Live Science.