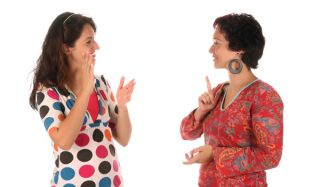 People who are deaf often have superior vision to make up for their lack of hearing, and new research has revealed that this phenomenon can be attributed to changes in brain function.

In a study of hearing and born-deaf cats the only other animal, besides humans, that can be born deaf researchers from University of Western Ontario found that two visual abilities are enhanced in cats that are deaf: peripheral vision and visual detection of motion.

In the deaf cats, a part of the brain that normally picks up peripheral sound, called the auditory cortex, changes so that it instead enhances peripheral vision.

That means the basic function of that part of the brain stays the same, but it enhances auditory abilities instead of visual abilities, researchers said.

"The brain is very efficient, and doesn't let unused space go to waste," study researcher Stephen Lomber, a professor at the University of Western Ontario, said in a statement. "The brain wants to compensate for the lost sense with enhancements that are beneficial."

For example, Lomber said, a person who is deaf would benefit from seeing a car moving toward them while it was still a great distance , because he or she wouldn't be able to hear the car.

Now, researchers are trying to discover how the brain of a deaf person differs from that of a hearing person. This will give them a better understanding of how the brain handles cochlear implants, which are devices that help people who are deaf to hear. They want to find what happens when hearing is restored to a brain that has already rewired itself to compensate for hearing loss.

Lomber said he also hopes to see if these changes in the brain take place in people who weren't born deaf and were once able to hear, or if that previous ability to hear prevents the changes from taking place.

The study was published online Oct. 10 in the journal Nature Neuroscience.