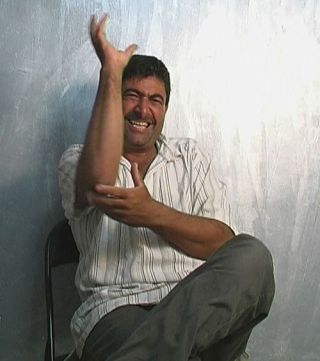 A language in use for just 70 years has evolved quickly and with unexpected structure, researchers said Monday.

The Al-Sayyid Bedouin Sign Language (ABSL) is as an alternative language for a community of about 3,500 people, several of whose members are deaf. It has been in use for three generations, arising naturally with no outside influence. Other relatively new languages are outgrowths of related tongues or are heavily influenced by existing languages. So ABSL offered an unprecedented opportunity to study the early development of language rules.

Scientists expected to find a rudimentary set of gestures for ABSL.

"But I was impressed immediately by how sophisticated the language was," said Carol Padden, professor of communication at the University of California, San Diego. "This is not an ad hoc, spur of the moment communication. It is a complex language capable of relating information beyond the here and now."

The language has given scientists their first opportunity to witness the laying of a grammatical foundation.

"The grammatical structure of the Bedouin sign language shows no influence from either the dialect of Arabic spoken by hearing members of the community or the predominant sign language in the surrounding area, Israeli Sign Language," Padden said. "Our findings support the idea that word order is one of the first features of a language, and that it appears very early."

Bedouin's are nomadic tribes. But they do settle. Al-Sayyid is a village of 3,500 Bedouins in Israel's Negev Desert. Two sons of the founder were deaf. The trait surfaces whenever two carriers have a child, so the deaf people -- numbering about 150 now -- are distributed throughout the village.

"It is a language of the entire community, both hearing and deaf," Padden said. "ABSL is transmitted within families across generations, and children learn it without explicit instruction. It is the best analogue we have for studying how any new language is born and grows."

Initial results of the ongoing study will be published online this week by the Proceedings of the National Academy of Sciences.