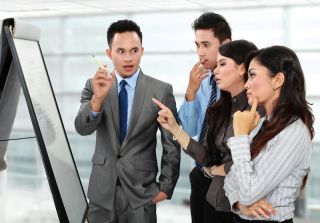 SAN FRANCISCO — People who work together on a team go through a bit of a mind meld, as their brains literally begin to synchronize, research shows.

The scientists found that team members' brain waves become more tightly coupled as the individuals work together. What's more, brain waves can reveal who will emerge as the leader of a group.

The brain-scanning method used in the study could boost teamwork in organizations where group cohesion is mission-critical, such as on an underwater submarine or in a new squad in the army, said Chris Berka, the CEO of Advanced Brain Monitoring, who discussed the work here at the 2015 NeuroGaming Conference. [5 Influential Leaders Who Transformed the World]

Most people have experienced working on a team where a few members blather on, hog discussions or take things on a tangent. The result? Some people zone out, or at the least feel incredibly frustrated, the researchers said. And in the end, the team doesn't work very effectively.

To understand a bit more about why teams go wrong — and what can be done to make them productive, Berka and her colleagues have been studying the brains of people as they worked on team projects.

In one study, small groups of students were given math or science problems that required a collaborative solution, while they wore the company's electroencephalographic (EEG) caps, which tracked the patterns of electrical activity across each person's brain.

When the teammates were working together effectively, their brain waves were tightly synchronized. For instance, they showed similar rises in activity in brain areas tied to engagement, attention or cognitive workload. Those who never arrived at a solution tended to be more out of sync, Berka said.

In another study, which was presented at the 2013 Academy of Management Meeting, 146 MBA students at Esade's business schools in Spain were asked to come up with a solution to an ethical "case study," based on a real-life situation. In the study, Levi Strauss had discovered child labor in the company's Bangladeshi textile factory. The plant is one of the company's best producers, and some of the children, who were their family's only source of support, said they would resort to prostitution if they lost their jobs. Success was based on addressing the ethical issues while not neglecting the company's economic position.

The researchers could identify halfway through a group session who would emerge as a leader, based in part on the rise in the average electrical activity in the brain's midline theta region, a key signature of mental engagement.

"The person who was going to emerge as a leader, every time they spoke, the team engagement went up," Berka told Live Science. The researchers identified the emergent leader based on the ratings of the team itself and experts watching a recorded video of the interaction.

"It had nothing to do with how often people spoke," Berka said, and in fact, when some nonleaders hogged conversation, people often zoned out, she added.

Interestingly, when other people were talking, some team members showed suppressed brain activity in key regions. The thinking goes that more empathetic people have a particularly strong response in so-called suppression mirror neurons, or brain cells that quiet brain activity when a person watches someone else do or say something, Berka said. Researchers have hypothesized that this suppression allows people to focus or pay more attention to what someone else is doing, and have tied stronger suppression to greater empathy, Berka added.

"Those who performed the best, who had the most creative solutions, had at least one team member who was very empathetic," Berka said.

The researchers have already been using this analysis to understand why some navy teams living together on submarines for years jell instantly, while others take longer. But the biggest potential application is for leadership training, because EEG signals could help identify the traits or behaviors that make good leaders, Berka said.