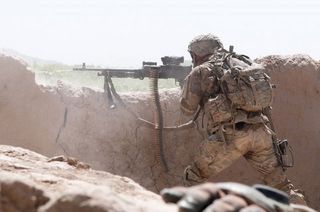 Successful leaders may be more psychologically complex than the less accomplished, a new study finds.

The researchers looked at the self-image of military leaders and their thought processes during a hypothetical combat scenario that was going downhill fast. The analysis revealed that leaders with a more complex understanding of their role were better at adapting to the changing situation.

Study researcher Sean Hannah, a retired U.S. Army colonel who is now a professor of management at Wake Forest University in North Carolina, said the research could help future efforts to pick and train strong leaders.

"This profile can help us develop brain-training methods to enhance brain functioning in leaders," Hannah said in a statement. [The Most Powerful Modern Women Leaders]

Adaptability is known to be an important leadership trait, but few studies have looked into what makes a leader more adaptable. Hannah and his colleagues asked the question by recruiting 103 military leaders, ranging in rank from officer cadet to major, and asking them to fill out a questionnaire about leadership roles.

First, the leaders had to imagine themselves in a combat leadership position and freely list the roles they might have to take on in that situation. Next, they were given a pre-made list of 33 leadership attributes and asked how important those attributes would be in various roles.

Some of the participants also underwent an electroencephalography scan (EEG) to measure the coordination of activity in the frontal lobe of the brain. The researchers suspected that more in-sync connections would be related to greater leadership skill.

Finally, the researchers tested that leadership skill by presenting the volunteers with a written scenario in which they were the leader at a security checkpoint during a humanitarian mission in Africa. The situation devolved rapidly from delivering food aid to dealing with hostile locals and feuding warlords, wrapping up with a U.S. helicopter being shot down near the checkpoint. As they read the scenario, the leaders had to write out narratives of what they would do and why, which were later graded by experienced military officers.

The higher-scoring military leaders were found to have more complex understandings of their leadership roles, listing more roles and attributes as important than lower-scoring leaders. The EEG also revealed that leaders who did better processing the Africa scenario had more coordinated frontal lobe activity, the researchers wrote online April 1 in the Journal of Applied Psychology.

Complexity, and thus adaptability, may come naturally to some, but Hannah and his colleagues hope their findings could be used to train potential leaders. Leaders-in-training could be tested on the complexity of their self-concept and tracked over time to see if training was working. EEG measurements might provide another tool to track leadership development, the researchers wrote.