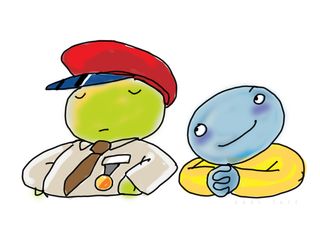 Do you tend to fall into leader or follower roles?
(Image: © Karl Tate, LiveScience Infographic Artist)

"Who wants to lead the class project?" the teacher asks. Some hands go up, others stay down, someone looks at the ground and another kid yells "I do! I do!"

Even at a young age, a few of us jump to the fore, excited to take on the responsibility of leadership. Others of us defer such roles, content to follow who's in charge.

The fact that these tendencies emerge in youth speaks to how science has shown, to a certain extent, that there are natural born leaders and followers. Genetically conferred traits such as outgoingness, intelligence, a will to dominance and physical attractiveness do correlate with those who assume leadership positions.

Followers can possess all of these traits too. But given the evolutionary pressures that have favored group coordination going back millions of years, the emergence of leaders is guaranteed whenever a pack of people get together.

"Leadership is hardwired into our DNA and it comes from dominance and social hierarchy in animals," said Ron Riggio, professor of leadership and organizational psychology at Claremont McKenna College in California.

Humankind, however, has largely transcended the natural pecking order in which the physically biggest and toughest tend to lord over smaller subordinates. Otherwise, all our leaders would be National Football League linemen, yet leaders and followers come in all shapes and sizes.

Studies suggest that ultimately our upbringing and experiences matter most in developing innate tendencies, researchers say. In other words, leaders and followers can be made, out to the extremes of dictators and those who blindly follow them.

Born to be the boss?

One might assume that a will to power runs in families. Consider, for example, the political dynasties of the Adams, the Kennedys and the Bushes, or football quarterback families such as the Mannings.

Studies support this idea that leadership can be rooted in an individual's "nature." A built-in drive to lead comes in the form of genes passed on from parents.

"Genes affect your chemistry, your brain and your physiology," said psychologist Richard D. Arvey, head of the department of management and organization at the National University of Singapore. "Think of [genes] as working through personality, intelligence, cognitive skills and also some physical characteristics. All of those are involved and correlated with who becomes a leader."

To gauge the impact genes have on leadership, Arvey and colleagues compared surveys filled out by identical twins and fraternal twins. Identical twins share 100 percent of each other's genes, while fraternal twins share 50 percent. When raised by the same family, sets of twins grow up in similar environments, allowing genes' influence to be clearly assessed. [8 Fascinating Facts About Twins]

For the study, participants indicated the number of leadership roles they had taken, from workplace supervisory and managerial jobs to the top spots in professional organizations.

As Arvey explained, if leadership as measured in the survey had a genetic basis, identical twins would show more closely matched results than fraternal twins.

That is in fact what the researchers saw. Surveys of both men and women in 2006 and 2007, respectively, revealed that 31 and 32 percent of the variability on leadership boiled down to innate genetics.

Figuring the function of the genes in question will be very difficult, said Arvey. "There's no particular [leadership] gene," he said. Rather, hundreds of genes complexly interact to produce biological tendencies that influence a person to want to wear the crown.

Compared to nature, "nurture" — the environment — has much more of an impact, according to Arvey's studies and others. "The bang for the buck is in the environmental aspects," said Arvey.

About two-thirds of the elements that mold someone into a leader are dependent on upbringing and personal experience, including education and the handling of challenging situations. Again going with the example of political dynasties, children in those families tended to have access to wealth, privilege and an expectation to carry on the leadership torch.

Some people come to enjoy the results of taking charge, taking their lumps when it doesn't work out, while others grow accustomed to helping a group toward its goals.

Followership, in this sense, is not merely the absence of leadership. Many of the qualities that make a good leader also make an ideal follower, including intelligence and communication abilities, said Riggio.

In following the evolutionary example, however, someone has to be top dog. Oftentimes the biggest and toughest male and female animals become the alphas of a wolf pack, say, or in monkey troops, cow herds, or flocks of geese. The subordinate role falls to the smaller and weaker members of the group.

"If you're going to be the alpha gorilla, it's really based on your size and temperament," Riggio said. "You have to be willing to fight and able to fight."

Our complex society has dispelled this physical might-makes-right system. "We took care of that with weapons. A smaller guy can beat a bigger guy with a weapon."

One perhaps need look no further than some of humanity's most extreme leaders, who have physically been anything but the part of the dominant silverback gorilla. Consider the homely dictator Adolf Hitler and the old, wild-eyed Heaven's Gate cult leader Marshall Applegate, who committed suicide along with his 39 followers back in 1997.

Partially gene-derived personality traits such as loyalty and obedience can be beneficial, of course, but if taken too far can lead to blind followership. A fusion of powerful leaders with legions of unquestioning followers can and has resulted in neither role serving the other well.

After all, a leader is only as good as the supporters who bear his or her decisions out. "Your effectiveness as a leader has very much to do with your followers," said Arvey.