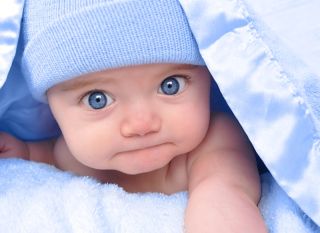 For the second year in a row, more parents have donned their boys with the name Noah than any other name, the Social Security Administration announced this morning (May 8).

"Emma didn't actually rise this year — Sophia fell," said Laura Wattenberg, founder of the baby-name website babynamewizard.com and author of "The Baby Name Wizard: A Magical Method for Finding the Perfect Name for Your Baby" (Three Rivers Press, 2013). "We're seeing parents work harder and harder all the time to choose names that they think will stand out." [Sophia's Secret: Tales of the Most Popular Baby Names]

Only one new name cropped up on the top 10 lists for each sex: James for boys and Charlotte for girls. The name Charlotte has been rising in popularity, and has seen several high-profile gains recently: Both Prince William and Princess Kate Middleton as well as Chelsea Clinton and her husband, Marc Mezvinsky, named their newborns Charlotte.

"Charlotte has made big gains for 15 years in a row, and debuted in the top 10 this year," Wattenberg told Live Science. The biggest influence on the name's popularity? It was Kristin Davis' character on "Sex and the City," she added.

But the addition of James to the top 10 seems more surprising: "In general, you don't see the classic kingly names rising," Wattenberg said. "This small set of names — English monarch names — dominated for centuries for boys and girls alike. Those have absolutely plummeted. But this year, James knocked Jayden out of the top 10, which looks like a move toward a more classic model." [See the List of the Top 50 Most Popular Baby Names]

Noah and Emma may have been the most common baby names in 2014, but in general, American parents are choosing less common names for their babies, according to research by Jean Twenge, a professor of psychology at San Diego State University.

Twenge suspects that culture, which once encouraged conformity and fitting in, now elevates what stands out. Her research, detailed in January 2010 in the journal Social Psychological and Personality Science, revealed that 40 percent of baby boys had one of the 10 most popular baby names in the 1880s. That percentage dropped to fewer than 10 percent of boys today. A similar plummet was seen in girls' names.

"There's been this cultural shift toward focusing on the individual, toward standing out and being unique as opposed to fitting in with the group and following the rules," Twenge said at the time.

"Baby names with a classic style are going to be looking at a small pool of names, but if you have a creative style, you could be looking anywhere," she said. "Looking at the top 10 is actually a little misleading, because it makes it look like Americans still have a classic style. Those are just the names that people agree on, but the percentage of babies getting a top 10 name is plummeting."

As part of her analysis, Wattenberg tracks baby names that spike in popularity but don't show up on the Social Security Administration's lists. She said the fastest-rising boy's name in 2014, Gannon, comes from the TV show "Teen Mom."

"Angelina Jolie can step aside," Wattenberg said. "The No. 1 trendsetter for lasting style decisions is pregnant teenagers."

Another pattern Wattenberg sees is a rise in what she calls "turbo-charged names" for boys. "You have to picture where you'd find the overlap between a skateboard brand and a baby name," she said. "It's a trend that's brewing that I think is really going to astonish people."

Some of these fast-rising names include Axl, Hendrix, Ace, Titan, Legend and Royal, Wattenberg said.

Yet, there is no similar trend for girls' names, according to Wattenberg. "It really seems to be almost like the superhero universe — very male-dominated," she said.

Different regions of the United States also seem to cling to their own naming styles, with the "older" states, such as the 13 original states, sticking with baby names passed down over generations. In contrast, more recently established U.S. states (or frontier states), such as Washington and Oregon, are taking the lead with more adventurous — less common — baby names. That's according to research by Michael Varnum and Shinobu Kitayama of the University of Michigan, published in 2010 in the journal Psychological Science.