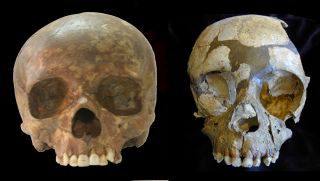 Ancient teeth from Italy suggest that the arrival of modern humans in Western Europe coincided with the demise of Neanderthals there, researchers said.

This finding suggests that modern humans may have caused Neanderthals to go extinct, either directly or indirectly, scientists added.

Scientists have hotly debated whether Neanderthals were driven into extinction because of modern humans. To solve this mystery, researchers have tried pinpointing when modern humans entered Western Europe. [Image Gallery: Our Closest Human Ancestor]

The Protoaurignacians, who first appeared in southern Europe about 42,000 years ago, could shed light on the entrance of modern humans into the region. This culture was known for its miniature blades and for simple ornaments made of shells and bones.

Scientists had long viewed the Protoaurignacians as the precursors of the Aurignacians — modern humans named after the site of Aurignac in southern France who spread across Europe between about 35,000 and 45,000 years ago. Researchers had thought the Protoaurignacians reflected the westward spread of modern humans from the Near East — the part of Asia between the Mediterranean Sea and India that includes the Middle East.

However, the classification of the Protoaurignacians as modern human or Neanderthal has long been uncertain. Fossils recovered from Protoaurignacian sites were not conclusively identified as either.

"We finally have proof for the argument that says that modern humans were there when the Neanderthals went extinct in Europe," study lead author Stefano Benazzi, a paleoanthropologist at the University of Bologna in Ravenna, Italy, told Live Science.

The researchers investigated a lower incisor tooth from Riparo Bombrini, an excavation site in Italy, and found it had relatively thick enamel. Prior research suggested modern human teeth had thicker enamel than those of Neanderthals, perhaps because modern humans were healthier or developed more slowly. They also compared DNA from an upper incisor tooth found in another site in Italy — Grotta di Fumane — with that of 52 present-day modern humans, 10 ancient modern humans, a chimpanzee, 10 Neanderthals, two members of a recently discovered human lineage known as the Denisovans, and one member of an unknown kind of human lineage from Spain, and found that the Protoaurignacian DNA was modern human.

Moreover, prior research suggests that Neanderthals in Europe might have been headed toward extinction before modern humans even arrived on the continent. Neanderthals apparently experienced a decline in genetic diversity about the time when modern humans began turning up in Europe.

"The only way we might have proof of how modern humans caused the decline of Neanderthals is if we ever find a modern human burying a knife into the head of a Neanderthal," Benazzi joked.

The researchers now hope to find more Protoaurignacian human remains. "Hopefully, we can find DNA that may say something about whether these modern humans and Neanderthals interbred," Benazzi said.

The scientists detailed their findings in the April 24 issue of the journal Science.