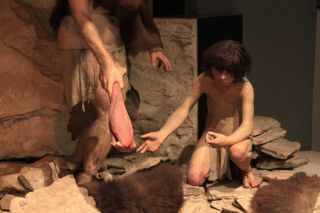 From an exhibit at the National Museum of Natural History, Washington DC, US.
(Image: © Flickr/Ricardo Giaviti, CC BY-NC-SA)

SAN FRANCISCO — Neanderthals may have died off because they failed to harness the power of fire to the extent their human cousins did, a new data analysis suggests.

"Fire use would have provided a significant advantage for the human population and may indeed have been an important factor in the overall collapse or absorption of the Neanderthal population," said Anna Goldfield, a doctoral candidate in archaeology at Boston University, who presented the findings here on Thursday (April 16) at the 80th Annual Meeting of the Society for American Archaeology. [The Top 10 Things That Make Humans Special]

One of the enduring mysteries of human history is why the Neanderthals went extinct in most of Europe around 40,000 years ago. Neanderthals had been living on the continent for hundreds of thousands of years when the first modern humans showed up about 45,000 years ago, Goldfield said. Then, in a relatively short span of time, the Neanderthals vanished.

"The arrival of humans had something to do with the extinction of Neanderthals," Goldfield told Live Science.

But the exact cause has been a matter of hot debate. Some have postulated that Neanderthals found it increasingly difficult to access resources they needed given their small group sizes and relatively local trading networks. Other scientists have even proposed that humans cannibalized their Neanderthal rivals.

"The issue of Neanderthal extinction is very complex, and very little is agreed upon," Goldfield said.

Goldfield and her colleague Ross Booton, a mathematical biologist at the University of Sheffield in the United Kingdom, wondered whether fire use had something to do with the demise, they said.

One big difference between the Neanderthals and humans may have been modern humans' mastery of fire. Not only can it provide warmth, but fire also enables people to cook their food. This can kill bacteria, making food safer, and denature proteins, meaning the body can harness more calories from the same amount of food. In addition, Neanderthals may have required more calories to survive in the first place because they had higher average body mass. Thus, modern humans' lower food needs could have given them a decisive edge in the cold, nutritionally sparse environment of Western Europe at the time, Goldfield said.

While some fossil sites suggest Neanderthals used fire, they may not have used it often or consistently. For instance, Neanderthals occupied two sites in southwest France — Roc de Marsal, and Pech de l'Aze IV — for tens of thousands of years. The sites contain tens of thousands of stone tools and animal bones, but almost no evidence of fire making, said Dennis Sandgathe, an archaeologist at Simon Fraser University who has excavated the sites.

"The Neanderthals are somehow just getting by without fire," Sandgathe told Live Science.

However, because so much remains unknown about Neanderthals, it's tough to draw firm conclusions about the causes of their decline, Sandgathe said. For instance, estimates for how many calories Neanderthals needed to survive are rough, he said. In addition, scientists still don't agree on exactly what Neanderthals ate. Whether Neanderthals ate plants or were ultra-carnivorous (or even cannibals) could affect the extent to which fire affected their survival, he added.