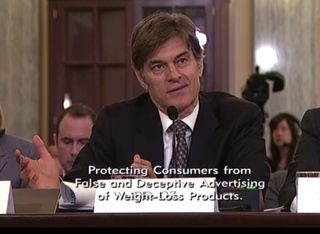 Dr. Mehmet Oz has made a name for himself in part by touting "miracle" cures and weight-loss products, but the TV personality is now facing fire from critics for making health claims that are not supported by scientific evidence.

Oz was strongly criticized for his claims about weight-loss supplements in a Senate hearing in June 2014. Now, 10 doctors from around the United States have called for Oz to be removed the faculty of Columbia University in New York, where he is a cardiothoracic surgeon.

Oz will respond to his critics on Thursday (April 22) in an episode of "The Dr. Oz Show." The doctor announced it in a preview of the show that was released on Tuesday evening. The show began in 2009, and will air its 1,000th episode this month.

"I know I've irritated some potential allies in our quest to make America healthy," Oz said on his show on Tuesday, CNN reported. "No matter our disagreements, freedom of speech is the most fundamental right we have as Americans. And these 10 doctors are trying to silence that right."

Here are a few of the "miracles" that Oz has promoted and the claims he has made over the years. [Wishful Thinking: 6 'Magic Bullet' Cures That Don't Exist]

Oz has claimed a long list of products can help people lose weight, but perhaps the most dubious is green coffee extract.

"You may think magic is make-believe, but this little bean has scientists saying they've found the magic weight-loss cure for every body type," Oz said about the supplement in an episode of his show that aired in 2012.

But the only scientific study that supported that claim was funded by the product's manufacturer and has been retracted, the blog Retraction Watch reported in October 2014.

Oz has also called for the labeling of food made from genetically modified organisms (GMOs). The letter from the 10 doctors that calls for Oz's dismissal argued against his "relentless opposition to the genetic engineering of food crops."

Oz has spoken out about the current lack of requirement that foods that contain GMOs be labeled as such. "I do not claim that GMO foods are dangerous, but believe that they should be labeled like they are in most countries around the world," Oz wrote on his Facebook page last week.

But some experts say that labeling GMO foods would needlessly raise public alarm, and that the broad scientific consensus is that these foods are no more harmful than non-GMO foods.

"Foods containing ingredients from genetically modified (GM) crops pose no greater risk than the same foods made from crops modified by conventional plant-breeding techniques," the American Association for the Advancement of Science board of directors said in a statement in 2012.

3. Cure for the common cold

Dr. Oz has touted Umckaloabo Root Extract as a remedy for the common cold.

"It has been incredibly effective at relieving cold symptoms, and a new study shows it helps the flu," Oz said in a video.

There has not been much science to back up the medicinal benefits of this extract, and it can have side effects.

"There is weak evidence that an extract from the root of the plant Pelargonium sidoides could shorten the length of respiratory tract infections and relieve symptoms," according to the National Institutes of Health. "But these extracts can have side effects like stomach and bowel problems."

Oz's health claims aren't limited to dietary supplements. He once recommended that people with restless leg syndrome place a bar of lavender soap underneath their bed sheets, suggesting the floral smell may be relaxing.

There have been anecdotal accounts of using soap to cure nightly leg cramps, but no scientific research supports the claim.

On his show, Dr. Oz has promoted a do-it-yourself method for whitening your teeth: brushing them with a mixture of strawberries and baking soda.

But the method does not actually whiten teeth, and may in fact weaken them, according to a study published in 2014 in the journal Operative Dentistry. When the strawberry-baking soda mixture was applied to extracted human molars for 10 days, it produced no discernible whitening, the researchers found.

The homemade mixture lacked the chemicals hydrogen peroxide and carbamide peroxide, which are essential ingredients in tooth-whitening products, according to the American Dental Association.

In addition, strawberries contain a high concentration of citric acid and trace amounts of malic acid, which can degrade teeth.