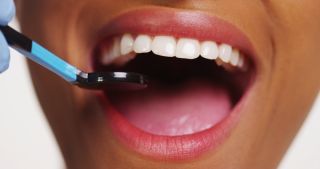 Brushing your teeth with a strawberry and baking-soda mixture  — which "The Dr. Oz Show" and YouTube videos have touted as a natural, cheap, easy, do-it-yourself way to brighten teeth — does not actually whiten teeth, and may even weaken them, new research shows.

In the past, lemons had also been advocated as tooth-whitening agents. However, researchers very soon discovered that the high concentration of citric acid in lemons made their juice acidic enough to potentially erode teeth.

"Strawberries also contain a high concentration of citric acid, with trace amounts of malic acid, depending on the ripeness and storage conditions," said lead study author So Ran Kwon, a tooth-whitening researcher at the University of Iowa. "However, I assume that malic acid is not well-known to the public, so that created some kind of a myth that it is different from citric acid, possibly working better and being safer."

The question of whether this strawberry and baking-soda concoction was effective came up during the 2012 annual meeting of the American Association for Dental Research in Tampa, Florida. [Smile Secrets: 5 Things Your Grin Reveals About You]

"Although we had a group of international and national researchers present, no one had a definite answer," Kwon told Live Science. "This prompted me to look more into those DIY natural whitening approaches."

To see if this strawberry and baking-soda strategy might work, Kwon first rubbed a mixture of baking soda and California-grown organic strawberries on 20 recently extracted human molars for 5 minutes, and then brushed the teeth gently. She repeated this procedure three times daily for 10 days, much like the recommendations given by those trying this homemade recipe.

The experiments found that teeth brushed with the strawberry and baking soda formula showed no real whitening, based on two well-known color-measurement tests, and an examination with a scientific instrument that detects colors known as a spectrophotometer. The mixture only removed superficial debris from the teeth.

The scientists also experimented with three other groups of human molars, which they subjected to other teeth-whitening remedies — over-the-counter whitening strips, prescription tooth-whitening products and a procedure mimicking professional teeth whitening at a dentist. All of these methods produced discernible whitening, the researchers found. They detailed their findings online Oct. 3 in the journal Operative Dentistry.

The main reason the strawberry and baking-soda recipe failed to work is that the mixture lacks the chemicals hydrogen peroxide and carbamide peroxide, which are key ingredients in tooth-whitening products, according to the American Dental Association.

"The only benefit of the do-it-yourself method — strawberries and baking soda — is, while it seems to make your teeth look whiter, they look whiter because you're just removing plaque accumulation on your teeth," Kwon said in a statement. "You really want something that penetrates into your teeth and breaks down the stain molecules. If you don't have that, you get just the superficial, and not the whitening from the inside, which was what you really want."

In addition, the strawberry and baking-soda formula had a major downside: It reduced the surface hardness of teeth by up to 10 percent, due to the erosive effect of the citric acid in the fruit. Kwon reported these findings in June in the journal Odontology.

"It was very interesting and rewarding to find some information and evidence to share with the lay public on the efficacy and potential adverse effects associated with do-it-yourself strawberry whitening," Kwon said.

As to whether there might be any other homemade recipes that could brighten teeth, Kwon noted that tooth whitening is the result of chemical agents "breaking down stain molecules deep within the tooth structure, so that the tooth lightens up from within. This procedure takes time.

"There may be natural ingredients that brighten teeth, but the application time would have to be definitely prolonged to see any whitening," she added. "I could further explore this as my next project."