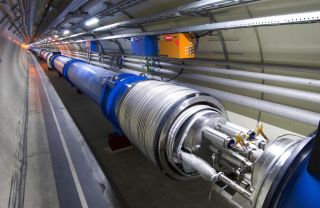 After a two-year break, the Large Hadron Collider at CERN is ready to restart operations at nearly twice the energy.
(Image: © CERN)

The world's largest atom smasher is about to enter uncharted territory.

The first run of the LHC had a single overarching goal: finding the Higgs boson, the particle that explains how other particles get their mass. With that task accomplished in 2012, scientists are now on the hunt for completely new physics.

Scientists know there is more out there than can be explained by the Standard Model, the reigning physics paradigm describing subatomic particles. Right now, there are dozens of theories to explain the unknown, with hundreds of potential particles, from twin Higgs to particles from another dimension. Most of these exotic proposals will turn out to be mathematical fantasies. [Photos of the World's Largest Atom Smasher]

So which particles do physicists think are the most likely to be found? We spoke to a few physicists to get their list of "most wanted particles."

The higher-powered LHC may finally be able to test for the existence of extra dimensions, said Lisa Randall, a string theorist at Harvard University in Cambridge, Massachusetts.

Some of the most promising particles are so-called Kaluza-Klein partners of the graviton, Randall said. These subatomic particles are based on a theory, proposed in the 1920s by physicists Theodor Kaluza and Oskar Klein, which relies on a fifth dimension to unite electromagnetism and gravity.

If a Kaluza-Klein particle exists in a fifth dimension, it could somehow interact with other particles via the known forces. [5 Reasons We May Live in a Multiverse]

"The Kaluza-Klein partner of the graviton is a very clean thing to look for," Randall told Live Science, because it could decay into particles physicists can already measure, such as electrons and muons. An excess of electrons and muons beyond Standard Model predictions could therefore be a sign of extra dimensions, she said.

However, Randall said she isn't holding her breath for any new discoveries.

"I think we'll be really lucky to see something in this run," Randall said. That's because the LHC is still less powerful than other, previously proposed colliders. At that "low" energy level, it really doesn't have the ability to thoroughly search for extra dimensions, she said.

When scientists discovered the Higgs boson in 2012, physicists everywhere rejoiced and said the Standard Model was complete. So why are they so excited to look for more of the same?

It turns out that new Higgs-like particles would solve many thorny questions, said S. James Gates, Jr., the director of the Center for String and Particle Theory at the University of Maryland.

"If there are more, that would open up all sorts of new perspectives," Gates told Live Science.

These mysterious Higgs siblings would reveal themselves when protons at the LHC collide and produce new Higgs particles, which would then decay into tau-leptons or W- or Z-bosons. Physicists would detect those new Higgs particles by an excess of tau-leptons or W- or Z-bosons above what the Standard Model predicts, said JoAnne Hewett, the director of the elementary particle physics division at SLAC National Accelerator Laboratory in Menlo Park, California. One promising candidate is the "twin Higgs," she said. [Sparticles to Neutrinos: The Coolest Little Particles in Nature]

The current run of the LHC could also find evidence for supersymmetry, which would at least double the list of particles in physicists' catalog.

Researchers have long grappled with a paradox, known as the hierarchy problem, in which the force of gravity is many, many orders of magnitude smaller than the weak nuclear force (10 raised to the 32nd power smaller).

When scientists work out the math, this means the Higgs Boson should be much larger, based on calculations from the Standard Model, than it appears in data from the LHC. That means that physicists need to either add in a mathematical fudge factor to explain the discrepancy  — or possibly that new supersymmetric particles may cancel out the discrepancy, Hewett said..

The last run of the LHC ruled out certain flavors of supersymmetry, but the general idea is still very much in the running, Hewett said. To validate supersymmetry, researchers should really see something in the current run, which has enough power to see much heavier particles than the past run. If they don't see any particles in the current run, that would mean the mass of any particles that did exist would be heavier than the known Higgs boson — and heavier particles don't work to cancel out the mathematical discrepancy between the apparent and calculated Higgs mass, she said.

"With this upcoming run, this is the make-or-break time for weak-scale supersymmetry," Hewett told Live Science.

Another top contender for the "most wanted particle" is a particle to explain dark matter. About 80 percent of the universe is composed of an invisible matter that exerts a gravitational pull on ordinary matter but does not interact with light, Gates said.

If, however, dark matter interacts with ordinary matter through the weak nuclear forces, then that interaction could leave some trace in the giant particle collider, Hewett said.

Dark matter particles and supersymmetric ones aren't mutually exclusive, though; one of the best candidates for dark matter is proposed by supersymmetry, Gates said.

This higher-energy run of the LHC could reveal signs of these sub-subatomic particles, though that seems less promising than supersymmetry, Gates said.

While scientists are hopeful they will find particles that can validate, or disprove, existing theories, there's always the chance of something completely out of left field, Hewett said.

Even if new discoveries don't align with any current theories, they'd still be a fabulous find, Gates said. The worst case would be to discover nothing new, which would leave particle physicists at a complete loss for where to go next, Gates said.

"We have lots and lots of mathematical speculations like supersymmetry, compositeness, extra forces," Gates said. "But if we don't get a real good hint from Mother Nature at a place like the LHC, boy are we going to be up the river."