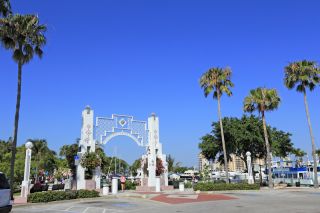 They've got sunshine: Sarasota, Florida, was part of the metro area ranked as having the highest well-being in the U.S. in 2014.
(Image: © Serenethos | Shutterstock.com)

If you're looking to move to a happy place, you might want to check out the North Port-Sarasota-Bradenton, Florida, area: The region reported the highest well-being out of the 100 most populous communities in the country, according to a new poll.

The top five happiest metro areas also included urban Honolulu, Hawaii; Raleigh, North Carolina; Oxnard-Thousand Oaks-Ventura, California; and El Paso, Texas, according to the Gallup-Healthways Well-Being Index, a measure based on factors such as feelings of purpose and physical health.

The metro areas with the lowest well-being score were Youngstown-Warren-Boardman, Ohio-Pennsylvania; Toledo, Ohio; and Knoxville, Tennessee, the poll found. Ohio also had three other communities that ranked in the bottom 10 for well-being: Dayton, Columbus and Cincinnati. [See the Full List of Happiest U.S. Metro Areas]

From January through December 2014, Gallup-Healthways researchers conducted telephone interviews with a random sample of more than 176,000 adults living in metropolitan areas in all 50 states and the District of Columbia. These areas were defined by the U.S. Office of Management and Budget.

Well-being was calculated on a scale of 0 to 100 (where 0 represented the lowest possible well-being and 100 represented the highest). The metric took into account overall well-being, as well as five essential elements of well-being, including daily feelings of purpose, loving relationships, financial security, safety and pride in one's community, and physical health.

The survey found big differences between communities with the highest and lowest well-being scores. Compared with people who live in the highest-scoring areas, those in the lowest-scoring regions were 55 percent less likely to enjoy what they do each day, and 58 percent more likely not to feel pride in their community.

The regional findings are consistent with statewide reports of happiness, which show that well-being is generally highest in the Northern Plains, the mountainous West and the West, and lowest in the South and the industrial Midwest.

States with the highest well-being also tended to have the lowest use of drugs for relaxation purposes, the poll found.

In general, residents of places with the highest well-being were more likely to score well across multiple elements, which likely had a synergistic effect, the researchers said.

"This may reflect what is perhaps the most important factor separating the nation's high well-being communities from those with lower well-being: a holistic view of well-being," the researchers said in a statement.