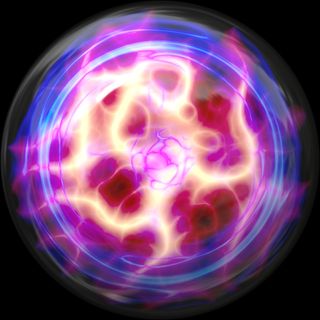 A researcher at the defense company Boeing has filed a patent for a sci-fi-esque cloaking device that would protect soldiers from intense shock waves generated by explosions.

The just-issued patent (No. 8,981,261) to Boeing envisions stopping shock waves using a veil of heated, ionized air. Such a "shield" would damp the force of explosions. It doesn't build an invisible wall of force, but rather makes shock waves bend around objects, just as some high-tech materials bend light and make things invisible.

Brian J. Tillotson, a senior research fellow at Boeing, said the idea occurred to him after noticing the kinds of injuries suffered by soldiers who served in Iraq and Afghanistan. "We were doing a much better job of stopping shrapnel," Tillotson told Live Science. "But they were coming home with brain injuries."

Though the armor plating on a military vehicle might stop the debris from a roadside bomb from injuring a soldier, it can't shield against the shock waves generated by such explosions. The blast wave goes right through a human body and causes massive trauma. (This is why the action-movie scenes where the hero runs ahead of an explosion and escapes harm are pure fiction.)

Tillotson's invention is a device that would heat the air in front of the spot where the bomb goes off. In one version, a detector "sees" an explosion before the shock wave hits. The detector is connected to an arc generator, basically two ends of a circuit connected to a large power source. When the system generates enough current, an arc of electricity jumps between the two ends of the circuit, like a bolt of lightning. [Science Fact or Fiction? The Plausibility of 10 Sci-Fi Concepts]

That arc heats and ionizes, or charges, particles of air. The heated air would work as a shield by changing the speed at which shock waves travel, and therefore bending them around a protected soldier, Tillotson said.

Sound waves (and other wave types) propagate faster in hot air, Tillotson said. For that reason, the shock wave would speed up when it hits the heated air around the electrical discharge. As the shock wave speeds up, it would change direction slightly, or refract, away from the person or object behind the arc. That bending occurs because of the change in speed of the wave, and the shape of the area of hot air the shock wave hits determines the exact direction.

"With a convex lens you focus the light," he said. "A concave lens spreads it out." Light waves move slower in glass, so when light hits a glass surface it bends.  The lens must be concave to spread out that light. Because shock waves move faster in hotter air, a spherical or cylindrical area of hot air will cause the shock wave to bend, this time spreading out just like the light through a concave lens, becoming weaker. In doing so that hot-air shield could deflect shock waves.

Arc generators aren't the only way to ionize air. Lasers would also work, Tillotson said. A laser fired across the path of an explosion would ionize and heat the air around the beam, creating the lensing effect.

In another method, a strip of some metal could be placed on the side of a truck, for example. "Put a couple of kilo-amps [thousands of amperes] through a strip of metal, and it will vaporize," he said. The vaporized metal once again heats the surrounding air.

One issue for all of these methods of damping shock waves is the amount of power required. But Tillotson noted a lot of research in this area shows promise in decreasing that power suck. In addition, even a high-powered laser doesn't have to be on for long, perhaps a fraction of a second, to heat the air sufficiently. "It's basically a solved problem," he said of the power supply.

This isn't the only technology patent for Tillotson; he has at least a half-dozen others in areas such as aerodynamics and beamed power sources, and even other methods of damping shock waves. Whether this particular technology becomes a reality will depend, as many do, on future interest (and funding) from government and the private sector.