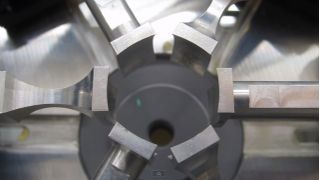 LONDON — Music blasts can't quite lift you off your feet just yet, but making droplets levitate with sound may be the first step in that direction. A team of researchers demonstrated experimentally how to lift and spin liquid droplets, controlling them with high-frequency sound waves.

The scientists developed a device that makes liquid droplets "dance," hovering in midair, without exploding. The achievement could lead to potential biological and pharmaceutical applications, such as studying chemical reactions in extreme environments without disturbing them via contact, moving hazardous materials, and analyzing and testing new materials without the risk of contamination. It could also be used in microgravity experiments on Earth.

The team describes the device, functioning at a frequency of 32.5 kilohertz, in their paper, recently published in the journal Physical Review Letters. The acoustic waves are in the ultrasound range — too high-pitched for the human ear to hear, but very loud, blasting at about 160 decibels, where 120 dB is the limit for human hearing, said study co-author Daniele Foresti, a physicist at the Swiss Federal Institute of Technology (ETH) in Zurich, Switzerland. [See Video of Droplets Dancing in Midair]

An acoustic or sound wave is a pressure wave, and the force it produces can overcome gravity.

When an acoustic transducer emits a sound wave and a reflector directly opposite reflects this wave back on itself, the resulting wave is known as a "standing wave" — one with a series of stationary nodes that stay in one place even as the wave oscillates. The force at the nodes can counteract gravity, making relatively heavy objects with water-like density levitate in one place, just above the node. Such droplet-hovering experiments were performed as long ago as in the 1970s. [The 6 Weirdest Effects of Gravity Explained]

But Foresti and colleagues didn't want droplets just to hover in midair; they wanted to manipulate them, and move the droplets around in a controlled fashion.

"Our concept is based on three … computer-controlled resonators that can create an acoustic standing wave and change its shape in a defined space," said Foresti.

The scientists placed the resonators in a circle, at 120 degrees with respect to each other. Each computer-controlled resonator creates acoustic standing waves at a frequency of about 32.5 kHz, and as the waves' shapes change, the nodes slowly move — and the objects hovering above them also move. The assembly creates a controlled-levitation space resembling a disk of roughly 5-6 centimeters (2-2.4 inches) in circumference," said Foresti.

To control how high and in what fashion the droplets fly, one simply needs to adjust the sound waves' amplitude (wave height), without modifying the phase, or the position of the wave relative to its origin. In other words, simply crank up the volume. In this way, it is possible to trap a droplet, squish it a bit into an ellipsoidal shape and make it spin while suspended in air, or drive it in a controlled orbital motion without destroying it. (The researchers have been working on levitating droplets and moving them in midair for some time, but it is only now that they've managed to also make them spin in a controlled fashion, and without popping them.)

"By modulating the sound waves, we can 'rotate' the levitation field inside," said Foresti. "The system is similar to a three-phase electric motor, but in this case we do not vary the phase of the signal, only the amplitude." (Such motors rely on three alternating currents of the same frequency that reach their peak values at one-third of a wave cycle from each other, so the waves are offset.)

Currently, the rotational speed is too slow and the frequency is too high for the device to levitate much bigger objects. "We would have to leave the ultrasonic range and enter in the audible range," said Foresti.

The scientists say the implications of the research are numerous. "A contactless technique means no contact with the surface, hence no contamination: We do not have to worry about the sample being in contact with a specific material," said Foresti. "Even nylon and Teflon have been shown to contaminate biological tests."

And no contact means no friction, he added. The achievement could also reduce wasted material. Especially at small scales, a water droplet tends to stick to a surface; after all, that's how surfaces get wet and how water "sticks" to glass. "With a contactless approach, we can use the entire liquid samples, without wasting them on a container's walls," he said.

Finally, no contact also equals free access: In bio-analytical measurements such as spectrometry, the presence of a container brings noise to measurements, and is a potential source of error. But if there is no contact, there is no noise.

Marco Marengo, a professor of thermal engineering at the University of Brighton in the United Kingdom, who was not involved in the study, said the research could also lead to applications in biology and medicine. "It is interesting for genetic manipulation since it is possible to put in contact different DNA chains in one single drop," Marengo said