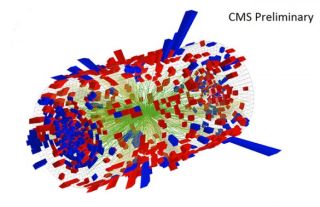 Scientists think they've created the smallest drops of liquid ever — the size of only three to five protons.

The droplets were made inside the world's largest particle accelerator, the Large Hadron Collider (LHC) in Switzerland, where particles are sped up to near light speed and then smashed together. When researchers collided protons with lead nuclei, they were surprised to find that the result was teeny, tiny droplets of liquid.

The researchers consider the droplets liquid because they flow more like a liquid than like any other state of matter.

"With this discovery, we seem to be seeing the very origin of collective behavior," Vanderbilt University physicist Julia Velkovska said in a statement. "Regardless of the material that we are using, collisions have to be violent enough to produce about 50 subatomic particles before we begin to see collective, flowlike behavior," added Velkovska, who is a co-convener of the heavy-ion program of the CMS detector, the LHC experiment where the droplets were made.

In fact, the droplets appear to be tiny bits of one of the hottest liquids known, called quark-gluon plasma. This plasma, essentially a soup of quarks and gluons (the subatomic ingredients of the protons and neutrons that make up atomic nuclei), has been made at LHC and other particle accelerators before.

When quark-gluon plasma was first discovered in the early 2000s inside the Relativistic Heavy Ion Collider at Brookhaven National Laboratory on Long Island, physicists initially thought it would behave as a gas does. Instead, they found it had liquid properties. Scientists think this plasma represents the state of the whole universe just moments after it was born in the Big Bang, when the universe was extremely hot and dense.

The first man-made quark-gluon plasma was produced by smashing two gold nuclei together, and was later recreated with collisions of two lead nuclei. The CMS researchers wanted to test whether quark-gluon plasma could also be made by colliding a lead nucleus with a proton, which has only 1/208 the mass of lead; they expected these impacts would not be energetic enough to produce the plasma.

The results of the experiment were unexpected. In about 5 percent of collisions — those that were most violent — enough energy was released around the "bullet hole" where the proton smashed through the lead that some of the protons and neutrons there melted. This material seemed to form droplets of liquid about one-tenth the size of the quark-gluon plasma batches created by lead-lead and gold-gold impacts.

Quark-gluon plasma is still a mysterious form of matter, and the scientists can't be absolutely sure yet that what they saw were liquid droplets. Further tests should help differentiate between that interpretation and other possible explanations of the results, the researchers said.

Velkovska and her colleagues detailed their findings in a paper submitted to the journal Physics Letters B.