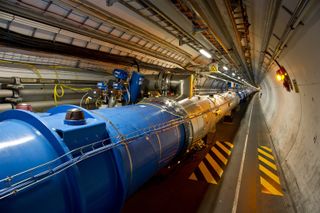 This photo shows the tunnel of the Large Hadron Collider, where beams of particles pass through the central pipes before colliding with each other.
(Image: © CERN)

For physicists, July Fourth fireworks may have come in the explosive announcement that a new particle had been found, one that is likely the long-sought Higgs boson thought to confer mass on all other matter.

The Higgs finding came from two experiments called ATLAS and CMS taking place at the European Organization for Nuclear Research (CERN) within the world's largest atom smasher, called the Large Hadron Collider. There, physicists send protons at near light-speed around the 17-mile-long (27 kilometer) underground ring beneath Switzerland and France. The protons collide head-on to create explosions that give rise to new, exotic particles.

Here's a look at the atom-smashing machine, the possible Higgs particle and the scientists involved, by the numbers:

5: The level of significance called sigma found for the new particle in the ATLAS experiment. A 5 sigma means there is only a 1 in 3.5 million chance the signal isn't real.

125-126: The mass of the new particle, possibly the Higgs boson, in gigaelectron volts (GeV), a unit approximately equivalent to the mass of a proton.

1964: The year physicist Peter Higgs predicted the existence of the field that is named after him. [5 Implications of Finding the Higgs Boson]

180: Megawatts of power, or 180 million watts, need to keep the CERN laboratory running, with the LHC contributing about 120 MW.

7,000: The weight of the detector used for the ATLAS experiment in metric tons.

2,900: The number of scientists who took part in the ATLAS experiment searching for Higgs in the Large Hadron Collider.

1,740: The number of physicists with doctorates who are involved in the CMS experiment.

250: The number of those CMS physicists with Ph.D.s who are women.

11,000: The number of times per second each proton goes around the LHC ring while travelling 99.999 percent the speed of light.

100,000: The number of CDs it would take to record all the data from the ATLAS detector per second, or a stack reaching 450 feet (137 meters) high every second; at this rate, the CD stack could reach the moon and back twice each year, according to CERN.

27: The number of CDs per minute it would take to hold the amount of data ATLAS actually records, since it only records data that show signs of something new.