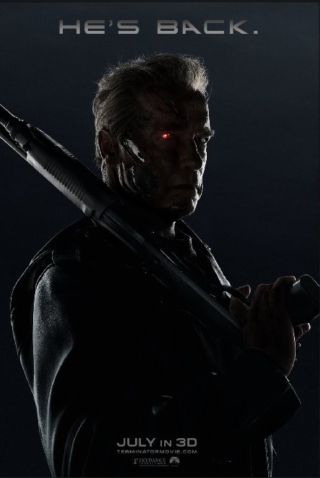 Artificial Intelligence will rule Hollywood (intelligently) in 2015, with a slew of both iconic and new robots hitting the screen. From the Turing-bashing "Ex Machina" to old friends R2-D2 and C-3PO, and new enemies like the Avengers' Ultron, sentient robots will demonstrate a number of human and superhuman traits on-screen. But real-life robots may be just as thrilling. In this five-part series Live Science looks at these made-for-the-movies advances in machine intelligence.

As he's so often promised, Arnold Schwarzenegger will be back, once again taking on his iconic killer-robot role in July's "Terminator Genisys." While no Skynet-like AI has sent red-eyed robots after humanity (thankfully), the prospect of weaponized AI has gotten much more likely in the years since the first "Terminator" film in 1984.

Autonomous aerial vehicles, or drones, are now "an integral part of military operations," said drone historian Richard Whittle, as reported by CNET. The next step, some predict, will be to create drones that employ AI to decide on their when and whom to attack.

Militaries around the world are working on drones potentially capable of such autonomous strikes, Peter Asaro, co-founder of the International Committee for Robot Arms Control, told Live Science. Those weapons range from the U.S. Navy's X-47B, which can take off and land autonomously from an aircraft carrier, to the supersonic British Taranis, which can automatically dodge missiles, he said. The Israeli Harpy missile can identify and attack enemy radar installations on its own. [In Photos: UK's Top-Secret 'Taranis' Drone Takes Flight]

After predicting the appearance of self-deciding military drones back in 2006 in his book "Mind Wars" (Dana Press), Jonathan Moreno said he's seen an escalation in the military's interest in neuroscience and AI. "There's lots of conversation on the use of neuroscience for machines that use weapons," Moreno, a professor of neuroethics at the University of Pennsylvania, told Live Science. "In the last nine years, that's only accelerated."

Much of that "conversation," however, remains simply conversation, Moreno said, as the military waits for the engineering side to catch up with the neuroscience side. Military officials, too, say that drones that can decide when to strike won't arrive for some time.

"I think we're years and years away, maybe decades away, from having confidence in an automated system that can make those types of decisions," Lt. Gen. Larry James has said of the Air Force's drone program.

Regardless of anticipated timelines, the prospect of autonomous drones has many observers worried, particularly because these drones may mistakenly target civilians, Asaro said.

It's also difficult to say what will happen when multiple autonomous weapons get together, he said. "There may be unpredictable interactions between these autonomous systems," Asaro said, citing as a precedent the 2010 "Flash Crash," when autonomous stock-trading robots caused the Dow Jones to suddenly drop 1,000 points.