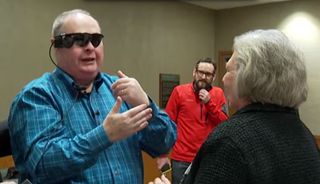 A blind man was recently able to see again after having a bionic eye implant.
(Image: © Mayo Clinic/YouTube screen shot)

A bionic eye implant is now allowing a blind man to see the outlines of his wife after 10 years in darkness.

The implant, called a retinal prosthesis, consists of a small electronic chip that is placed at the back of the eye to send visual signals directly into the optic nerve. This bypasses the damaged cells in the man's retina.

The bionic eye doesn't have enough electrodes to recreate the details of human faces, but for the first time since he lost his vision, the man can make out the outlines of people and things, and walk without a cane. [See Video of Blind Man's First Sight]

The Minneapolis-St. Paul man, Allen Zderad, suffered from a genetic condition called retinitis pigmentosa, in which the cells in the retina that gather light gradually die. While many people who suffer from this condition experience only decreased night vision, some lose their central vision completely.

Amazingly, after 10 years living with the disease, Zderad had figured out how to continue woodworking by relying on his sense of touch and perception of spatial relationships. But he was effectively blind; he could not see his wife or his grandkids, and could only see extremely bright lights.

Zderad's grandson was getting treatment for the same genetic condition from Dr. Raymond Iezzi, Jr., an ophthalmologist at the Mayo Clinic in Rochester, Minnesota. Zderad's grandson mentioned that his grandfather was almost completely blind, and the doctor asked to see Zderad.

Iezzi, it turned out, was conducting a clinical trial of a bionic eye implant made by Second Sight. Zderad became the doctor's first patient to get the implant.

Though retinitis pigmentosa destroys photoreceptors, the rest of the retina, including optic nerve cells that send light signals to the brain, remain healthy.

"What we're trying to do is replace the function of these lost photoreceptors," Iezzi said in a YouTube video released by the Mayo Clinic.

In January, Iezzi implanted the bionic eye by inserting the electronics and a wafer with 60 electrodes through the white of Zderad's right eye. Iezzi fixed the electronics outside the eye, then placed the wafer on the curved portion at the back of the eye, where the retina sits.

Two weeks later, the team activated the external portion of the device: a set of glasses that contain a tiny camera on the bridge of the nose and a belt-pack computer.

The glasses camera takes a picture of the world as the eye would see it, then feeds that information into the computer that Zderad wears around his waist. The computer translates that image into light signals that are then beamed through a wireless transmitter into the electrodes in the man's eye. The electrodes, in turn, transmit the light signals to the optic nerve, which relays the information to the brain.

As soon as the implant was activated, Zderad reached out to grab his wife's hands, which he could see for the first time in a decade. He even caught a glimpse of his own silhouette in a window. However, the system creates little flashes of light, rather than traditional images, so he will still need to go through physical therapy in order to better interpret the light signals coming from his implant, according to Mayo Clinic's statement on the case.