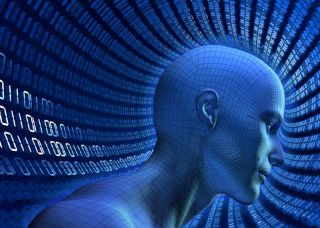 In his newest novel, "The Eye of God," James Rollins discusses a posthuman future and the world of bio-hacking, where biology merges with the hacker mindset to bring about the likes of cyborgs, superhuman implants and garage science.
(Image: © Tonis Pan | Shutterstock)

James Rollins has one foot planted firmly in science, the other in the unknown.

Rollins has his doctorate in veterinary medicine, but when the bestselling author sits down to write, his signature is creating works grounded in history and scientific plausibility, yet still shrouded in mysticism — Think Michael Crichton by way of Dan Brown.

In his newest novel, "The Eye of God" (William Morrow, June 25, 2013), a high-tech satellite crashes to Earth, creating a wrinkle in space-time. The satellite's final image is a time-displaced snapshot showing the entire U.S. East Coast in smoldering ruin. It's a tragedy that will happen … in four days.

The frantic quest to avert the tragedy leads multiple teams of DARPA's SIGMA agents through the triads of Macau, underneath the Aral Sea, and into possession of the skull of Genghis Khan.

And that's just the tip of the iceberg. The book also explores the shady world of bio-hacking, a real movement that merges biology and the hacker mindset with outcomes ranging from cyborglike humans and "superhero" implants to genetic experiments carried out in garages. Rollins shares his thoughts on bio-hacking and what tomorrow will look like. Get ready for a posthuman future. [Bionic Human: Top 10 Technologies]

LiveScience: One of the characters in your new book has been "bio-hacked," with rare Earth magnets implanted in his fingertips. You said this "allows people to experience electrical fields in amazing ways." How so?

Rollins: Well, your fingers aren't going to stick to your refrigerator, for starters. And you're not going to set off alarms when you go through metal detectors. They're very tiny little magnets that sit right next to a sensory nerve at the end of your fingertips. They're so sensitive that when they encounter any kind of electromagnetic field, they vibrate. And the vibration that the nerve picks up sends a signal that allows you to experience the quality and pitch of that electromagnetic field. I've talked to a few people who have had this done. Some do just one or two fingers; some all. But the people I've interviewed have said that if they're walking down the street and they pass over an underground electrical conduit, they can actually feel the waves of energy coming off that. Over time as they develop more sensitivity, they can qualify fluidity, shape, movement, and one guy even mentioned color of electromagnetic fields. It's an entirely different sixth sense! [Teleportation, ESP & Time Travel: 10 Tales of Superpowers]

LiveScience: So what are the practical applications of implants such as these?

Rollins: Well, some people get them just for the pure expansion of the senses. But one guy I spoke to was an electrical engineer, and he said he could determine if a hard drive was spinning properly inside its housing without even opening it up. He could feel the pattern of the energy. One other guy said he could actually feel which cylinders in his car were misfiring when he was fixing his engine.

LiveScience: You mention in your notes at the end of "The Eye of God" that you want to get these implants. But you haven't. Why not?

Rollins: Pain! [Laughs]. Across the board, all the people I interviewed said it's a fairly uncomfortable procedure. The other thing I'm waiting for is longer-lasting magnets. They have to change these out when they wear out, about once every two years, and new types of rare Earth magnets are in development that should have almost unlimited longevity. They're also going to coat the magnets with polymers that should lessen the chances of tissue reaction and possible infection. The medical side of me is always concerned with 'How safe is that? How sterile is that?' So I'm waiting for some more safety studies to be done before I do my own.

LiveScience: Is there any fear on your part? Pain is just pain — You pop some ibuprofen, and you’re okay. But is there anything dangerous in this?

Rollins: I don't think so. Infection is a possibility, and some people have complained of some numbness secondary to this. My intrigue outweighs any fear I might have.

LiveScience: You mention other bio-hacks in your book, such as tattoos with luminescent ink, people who get tiny jewelry implanted in the whites of their eyes, and implanted RFID chips that people can use as wearable storage devices. To a layman, this stuff sounds…crazy.

Rollins: It's all true.

Are there people doing even crazier stuff?

Rollins: There are. It gets very strange. I went to a — for lack of a better term — a "body modification fair" in San Francisco to research this …

Rollins: It seems like it! And in talking to the people there, one woman there asked to have arms exchanged between a pair of twins. Now that wasn't done. And that seems a load of crazy to me. But places like this are where you find the cutting-edge stuff. Now the RFID chips … that's another thing I'm tempted to do. That can be almost like a universal passcode for you — you grab your cellphone, and it automatically unlocks because it picks up the RFID chip code. Only you can access your laptop.  You can unlock your car with it. It can be very handy.

LiveScience: Please tell me no right-minded doctor could possibly switch arms on twins, for cryin' out load.

Rollins: No. Definitely not. Even the implantation of the RFID chips is not legal right now under California law. When stuff like this is done, it's all back-room stuff.

LiveScience: The guy who does these implants in your book is alternately described as a "grinder" and an "evolutionary artist." It’s very shady now, but do you think society will get to a place where we are more accepting of, say, the implantable RFID chip?

Rollins: Yes. I think that's the trend, and where we'’re heading. There's a whole "transhuman" movement, which is the merging of biology and machine. Google Glass is one small step, and now there's a Japanese scientist who's developed the contact lens equivalent of Google Glass. And those are two things you put right on, if not in, your body. So I think we're already moving that way, and quite rapidly. [Top 10 Features of Google Glass]

LiveScience: I don't want to put any words in your mouth, but would you call yourself an advocate for the transhuman movement?

Rollins: Yes. You don't need to put the words in my mouth. I'm fully on board. I think it's the next evolutionary step forward. There are limits to our biology, and I think the next expansion in our biology will be the merging of machine and man.

LiveScience: Okay. Let's go larger. I believe you're also an advocate of the theory that we might all be holograms, right?

Rollins: It's such a weird concept, but in researching this book, I went to Fermilab, the National Particle Accelerator Lab just outside of Chicago. And in talking to these people, these highly applied scientists, I asked what I always ask in these situations. I asked, 'What in your research disturbs you? What keeps you up at night?' And I got a great answer…

One of the gentlemen said, 'Well, one of the things that we're now studying is that possibility that the entire universe might be just a fabrication, a gigantic hologram.' My mind immediately went right to Star Trek's Holodeck, and … I didn't quite buy it. But he was quite serious, and said that from a mathematical standpoint … it's highly likely that the entire universe is defined by equations written on the inside sphere of the universe. They're actually going to be doing a test later this year at Fermilab using a device called a holometer to test this theory to see if the universe actually is a hologram. So in the next year I guess we're all going to find out, right? We'll see if we're all fabrications … just like the characters in my novels, right [laughs]?

For more on James Rollins and his interest in comic books, visit LiveScience sister site, Newsarama.com.

"The Eye of God" is available June 25 from William Morrow, a division of HarperCollins. You can order via Amazon, iTunes, or your local bookstore.