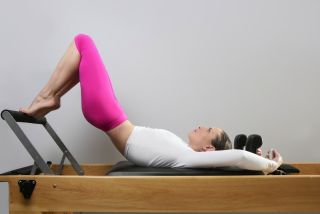 A woman who had persistent headaches found there was a strange culprit for her pain: a Pilates class that caused her brain fluid to leak, according to a new case report.

The brain fluid leak led to a persistent, worsening headache that was only alleviated when the 42-year-old British woman laid down, according to the report that was published in December in the Journal of Medical Case Reports.

Though doctors never identified the exact location of the leak, the patient improved after a few weeks of bed rest and pain relievers. [The 16 Oddest Medical Cases]

"The most common cause [of such leaks is] trauma, like a car accident," Luong told Live Science. Often, cerebrospinal fluid leaks out of a person's nose because there is a crack in the base of the skull and a tear in the dura lining the brain.

One telltale sign of a cerebrospinal leak is that there is clear, metallic-tasting fluid coming out of just one nostril, Luong said. (The woman in this case did not experience this symptom because her tear was around the spinal cord, not the brain.)

Tumors and botched sinus surgeries can also cause cerebrospinal fluid leaks. Spontaneous leaks with no obvious cause can be due to increased pressure inside the skull, which can erode the bone over time, Luong said.

Spontaneous leaks due to high pressure in the skull are more common in women and people who are overweight. It's also more common in older people, "because it takes some time for that pressure to ultimately erode the bone," she said.

In the new case, the middle-age British woman first reported symptoms after a Pilates Reformer class, in which participants do stretching and resistance exercises on a platform machine with straps and ropes.

During one maneuver, she felt a strange pop on the left side of her neck, but then had no other outward sign of injury. About an hour later, however, she developed a headache that got better only when she was lying down, according to the case report.

Her headaches worsened, and she went to her primary care doctor, who diagnosed a neck muscle injury. She was given opiate pain relievers and a muscle relaxant, but her headache kept getting worse.

After numerous doctors' visits over the next four weeks, the woman finally arrived at King's College Hospital in London, where a computed tomography (CT) scan revealed blood pooling in two spots outside her brain. A follow-up magnetic resonance imaging (MRI) scan showed pockets of fluid outside the spine.

The two scans suggested the woman had a tear in the lining of her spinal cord in her neck that was causing the fluid to leak out. Because the patient felt better using the standard treatment for such leaks — bed rest, drinking caffeinated beverages and taking nonsteroidal anti-inflammatory drugs (such as ibuprofen) — the doctors never identified the source of the tear. The woman recovered and was discharged from the hospital after two weeks.

Many people who have spontaneous spinal fluid leaks have some underlying condition, such as Marfan syndrome, which is a disorder of the connective tissue found throughout the body. Some past reports have tied such leaks to exercise, including one case of a brain fluid leak associated with yoga. In the recent case, the exercise injury during Pilates class was likely to blame, the researchers wrote in the paper.

Cerebrospinal fluid leaks can cause headaches for multiple reasons. One is that the leaks may allow blood to touch the surface of the brain.

"Any blood in your spinal fluid is very irritating to the brain and gives you a headache," Luong said.

However, the type of headache the woman experienced, in which the pain comes on suddenly and is made worse when sitting or standing, can be caused by low pressure in the cerebrospinal fluid. These type of thunderclap headaches occur in one out of every 50,000 people every year, the researchers wrote.