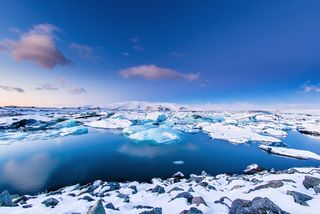 A massive outpouring of carbon dioxide from the deep ocean may have helped end the last ice age, scientists report today.

There is strong evidence that changes in Earth's orbit set the pace of the planet's ice ages, by altering how much sunlight reaches the Northern Hemisphere. Yet, carbon dioxide levels in the atmosphere also wobble with the advance and retreat of massive ice sheets, according to observations of ice cores and old ocean sediments. Carbon dioxide levels are lower during an ice age and higher when an ice age ends.

Now, scientists have documented a source for the massive exhalations of potent climate-altering gas seen at the end of the last ice age, about 16,000 years ago. [Photos: The 8 Coldest Places on Earth]

"The oceans were leaking carbon dioxide to the atmosphere," said study co-author Gavin Foster from the University of Southampton in the United Kingdom.

The researchers, led by Miguel Angel Martínez-Botíz of Britain’s National Oceanography Center in Southampton, looked at ice-age seafloor sediments in two regions where ocean currents force deep- ocean water to the surface. They examined the shells of single-celled microbes called foraminifera, which preserve the ratio of chemicals in seawater as they grow. A certain chemical ratio involving boron is a proxy for the carbon dioxide concentration in seawater thousands of years ago, when the microbes lived and died.

The samples tested in the study come from two seafloor drilling sites. One is located in the southern Atlantic Ocean, midway between South America and Africa, and the other is offshore Ecuador on the underwater Carnegie Ridge.

During the early Holocene Epoch, about 10,000 years ago, the carbon dioxide exhalations continued, yet gas levels stabilized in the atmosphere, according to the new study. This suggests that something starting sucking up the gas, perhaps re-growing forests or expanding peat bogs on land, the researchers said.

The findings suggest these regions were pumping carbon dioxide to the atmosphere. The gas concentrations in the two regions spiked at different times, hinting that different processes underlie the rise in ocean carbon, the researchers said. However, in both cases the scientists think carbon dioxide levels in these two regions jumped because water rich in carbon and nutrients welled up from the deep ocean.

This is not the first study to suggest that sharp increases in carbon dioxide coincided with the warming that began as Earth emerged from its most recent ice age. Earlier studies from the western equatorial Pacific Ocean also suggest the tropics were a significant source of carbon dioxide during deglaciation. Antarctic ice cores also record a jump in carbon dioxide levels in the atmosphere, followed by warmer temperatures.

Yet scientists still puzzle over what triggered these giant burps in greenhouse gas. Leading theories include changes in ocean currents or wind patterns. Some researchers recently suggested that sea-level drops triggered underwater volcanoes to erupt more vigorously, belching carbon dioxide in the process.

"We don't know the ultimate case," Foster said. "[But] we're one step toward the answer."

The researchers plan to test additional sites and examine how carbon dioxide levels changed through the glacial cycle, he said.