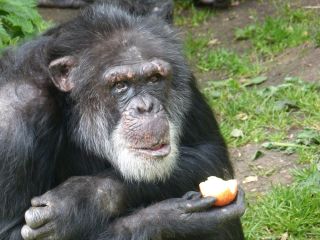 Louis, one of the Edinburgh chimps, begrudgingly eats an apple.
(Image: © Jamie Norris)

Zookeepers at Scotland's Edinburgh Zoo began a fascinating social experiment in 2010: They put a group of chimpanzees raised locally in the Netherlands together with a group of chimps raised in Scotland. This kind of chimpanzee-group mixing almost never occurs in the wild.

Like all chimpanzees, the two groups of chimps in the study had special grunts for certain types of food, which change based on their preferences. The Dutch chimps loved apples, and referred to the fruit using a high-pitched grunt, whereas the Scottish chimps disliked apples, and used a much lower-pitched grunt to describe the fruit.

But after three years of living with the Scottish chimps, the Dutch chimps did something that surprised the researchers: They started using the low-pitched grunt to refer to apples. The new grunts suggested that the Dutch group had learned the word from the Scottish chimps, according to the study, published today (Feb. 5) in the journal Current Biology. [Listen to chimps learning other groups' grunts]

Besides humans, a number of other primates are capable of vocal communication. For example, vervet monkeys have alarm calls to warn of specific predators, such as eagles and leopards. And chimps' grunts share some similarities with human words, said study researcher Katie Slocombe, an evolutionary psychologist at the University of York in England.

But until now, scientists had considered this ability — to learn the names for objects in an environment from peers — unique to human speech, Slocombe said.

Other researchers praised the results, but didn't find them particularly surprising.

"This study is consistent with a number of relatively recent studies that have suggested that social learning plays a role in some chimpanzee vocalizations," said Jared Taglialatela, a biologist atKennesaw State University in Georgia who studies ape communication but was not involved in the current research.

For example, Taglialatela and his colleagues have found evidence that young chimps learn to make attention-getting sounds from their mothers.

Though the new findings suggest that learning plays a role in some chimp vocalizations, the researchers did not specifically test whether the calls were functionally referential, meaning that other chimps understood what the call, such as the grunt for "apple," meant, Taglialatela told Live Science. "You can test this by presenting calls to a chimpanzee and then, for example, seeing if they will go to the 'apple' tree," he said.

Nevertheless, Frans de Waal, a primatologistat the Yerkes National Primate Research Center at Emory University in Atlanta, who wasn't involved in this new study, called it "one of many findings we have lately showing how much of primate social life is culturally constructed."