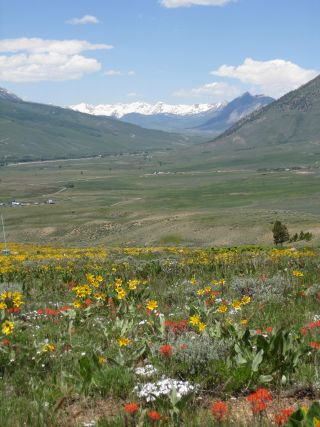 Biologist Josh Grinath seized a rare chance to study an ecosystem from top to tiny bottom when a black bear blundered through his Rocky Mountain meadow research plot, gobbling up ants and gnawing on equipment.

Grinath, a researcher at Florida State University, was already analyzing the codependent relationship between ants and treehoppers, which are tiny insects that poop sweet honeydew juice. The ants ward off predators that eat treehoppers, and in return, gorge on honeydew. The sap-sucking treehoppers chew on yellow rabbitbrush, a native plant that also hides sage grouse and provides forage for deer and elk. Grinath's earlier research in the meadow showed that rabbitbrush produces fewer seeds and struggles to grow whenever ants and treehoppers are present on the plants.

When the hungry bear appeared, wreaking havoc on ant nests for a high-protein snack, Grinath decided to track the cascading effects of this top predator. "When you look at a real ecosystem, it's not just predator-prey interactions," Grinath told Live Science. "There are many different kinds of interactions, and they all influence each other." [Gallery: Out-of-This-World Images of Insects]

Where the black bear toppled ant nests, nearby rabbitbrush grew better and produced more seeds, Grinath and his colleagues reported in the February 2015 issue of the journal Ecology Letters. A camera trap confirmed that bears were the culprit, Grinath said. In four years, bears attacked 26 to 86 percent of the 35 ant nests in the meadow research plot at the Rocky Mountain Biological Laboratory, near Almont, Colorado, the study reported.

The researchers further tested the effects with controlled experiments in the years following the bear's arrival. For example, they completely removed insect predators so the treehopper population thrived, and on other plants they scattered treehopper predators, such as lady beetles, to decimate the insects. Ultimately, the plants with the most predators responded with the most growth, mimicking the effects of a bear removing the protective ants.

"I think that ants are the most interesting species in this chain of species I've been interacting with," Grinath said. "Because the bears are targeting this one highly connected species, they have the potential to influence all of the organisms in this meadow."

Black bears, rabbitbrush, ants and treehoppers all have wide ranges across the Rocky Mountains, so the species likely cross paths in many places throughout the West, Grinath said.

For Grinath, the results highlight the many important roles that top predators fill in ecosystems. "My research shows there are multiple ways in which predators can influence plants and other organisms, and therefore it's important to conserve these top predators to maintain species diversity."