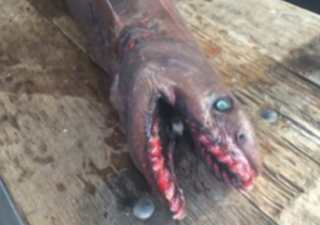 The bizarre creature was pulled up from a depth of nearly a mile, off the southeastern coast of Australia.
(Image: © Screenshot, Fairfax Media)

A bizarre, freaky-looking shark with rows of needle-sharp teeth and an eel-like body was caught by a fisherman in Australia.

The odd creature is a rare type of shark known as a frilled shark, and is sometimes called a fish "fossil" because its roots can be traced back 80 million years, CNN reported. It was found by fisherman David Guillot, who said he had never seen anything like it.

"The head on it was like something out of a horror movie," Guillot told Fairfax Radio on Wednesday, according to The Age. "It was quite horrific-looking ... It was quite scary, actually." [On the Brink: A Gallery of Wild Sharks]

Guillot was fishing for dory and sea perch near Lakes Entrance in Gippsland, off the southeastern coast of Victoria, when he dredged up the unusual fish from water nearly a mile (1.1 kilometers) deep.

The shark was about 4.9 feet (1.5 meters) long, Guillot said. It was so strange-looking that he originally thought it was a new species, according to CNN.

Frilled sharks (Chlamydoselachus anguineus) are normally found at extreme depths in cool, temperate waters off the coast of New Zealand and Japan. The fish can also be found between the coasts of the British Isles through Spain to northern Africa, Mark Meekan, a shark biologist at the Australian Institute of Marine Science, told The Age.

They are rarely caught, because their habitat is usually in areas where fishing is prohibited, but sometimes frilled sharks can be found in Taiwanese fish markets, scientists say.

The creature has 25 rows of teeth (about 300 in total) shaped like backwards needles. It usually eats squid and octopus, and can extend its jaw to swallow prey that is more than half its size, according to The Age. The shark's body resembles an eel's, and can turn back on itself.

The frilled shark was first described in 1884, and its closest relative, the cow shark, dates back about 95 million years, The Age reported.

Frilled sharks have extremely long pregnancies because their embryos grow only about a half-inch (1.4 centimeters) each month. A typical frilled-shark pregnancy is estimated to last about three-and-a-half years.

The animal was still alive when Guillot pulled it out of the water but did not survive for long, so he donated the shark to a local museum, according to CNN.

Editor's Note: If you have an amazing shark photo you'd like to share for a possible story or image gallery, please contact managing editor Jeanna Bryner at LSphotos@livescience.com.