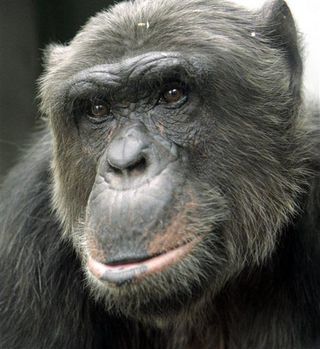 Matthew, 26, looks through the glass at his enclosure at an animal sanctuary in Vienna on May 4, 2007. The chimp probably does not know if he wants to be human or not. And that could be one of the many differences that separates him from us. Still, anthropologists admit it's hard to define what it is to be human.
(Image: © AP Photo/ Lilli Strauss.)

Matthew, a 26-year-old chimp, is headed to court in Europe as part of a human effort to classify him as a person.

Beyond the legal challenges, anthropologists say chimpanzees are not humans, though without a clear definition of what it means to be human, backing that claim up is a challenge perhaps fit for some great courtroom drama.

Animal rights activist and teacher Paula Stibbe, along with the Vienna-based Association Against Animal Factories (AAAF), says she wants the chimpanzee, named Matthew Hiasl Pan, declared a person. That way, Stibbe says she can become the primate's legal guardian if the bankrupt animal sanctuary where Matthew lives closes. (Under Austrian law, only humans are entitled to have guardians.)

The appeal has been filed in the European Court of Human Rights in Strasbourg, France. The case comes after Austria's Supreme Court upheld a lower court ruling in January, which rejected a request to appoint the chimp with a legal guardian. The rulings did not address whether a chimpanzee could be declared a person.

"His life depends on this decision," Eberhart Theuer, the animal rights group's legal advisor, told the Evening Standard, a tabloid newspaper in London. "This case is about the fundamental question: Who is the bearer of human rights? Who is a person according to the European Human Rights Charter?"

For some scientists, the question of humanness is a tricky one, as no single characteristic separates humans from every other animal. And behaviors once thought exclusive to us, such as tool-making, exist in many non-human primates. Considered our closest living relatives, chimps behave a lot like us and even share about 96 percent of their DNA sequence with humans.

But the bottom line is, chimps are chimps, not humans, say anthropologists.

"Granted, chimpanzees show many similarities with us as humans," said John Mitani, a primate behavioral ecologist at the University of Michigan, "but they are nonetheless chimpanzees, not humans, and are obviously different as well."

One anthropologist says the chimp dilemma brings up an animal-rights issue.

"We don't have a real formal venue for chimpanzees that have outlived their usefulness to whatever humans sort of owned them," said Jonathan Marks of the University of North Carolina, Charlotte. "Obviously it's a situation that needs to be addressed, but it needs to be addressed in the realm of animal welfare. Confusing humans for chimps never did anybody any good."

"Everybody who knows him personally will see him as a person," Stibbe told the Evening Standard.

Yet the definition of what it means to be a person, to be human, is a work in progress.

"One of the hard things is there is no single characteristic that has been found that makes humans truly unique," said Sarah Brosnan of Georgia State University. Brosnan studies social behavior and cognition in non-human primates.

Making matters worse, chimps show a smorgasbord of behaviors once tagged to humans only, including altruism, tool-use, an ability to learn from their kin and deal-making behaviors.

Looking to genetics for an answer is also thorny. If you were to line up any string of nucleotides (structural units) from a chimp's DNA with the corresponding human strand, about 96 or 98 out of 100 of the nucleotides would match up.

"Nobody is going to look at a human genome and a chimp genome and mix them up," Brosnan said. "But human genomes are different from each other, so it depends on where you draw the line."

About 6 million years ago, chimpanzees and human ancestors diverged. Chimps went their way, and we began to go ours.

The split led to various differences. For instance, chimps are covered in hair and we are much less so. A chimp's brain is about one-third the size of an average human brain. And we walk upright on two legs, while chimps typically walk on all fours.

"What seems to have happened initially is that our ancestors began walking most of the time upright on two legs," Marks said.

Along the way, our ancestors shed their thick coats of body hair, which allowed us to disperse body heat differently from chimps. Chimpanzees, like most mammals, pant to keep their bodies from heating up. Humans sweat. Apparently, Marks said, when our ancestors began speaking, their vocal tracts reorganized and that made it difficult to pant.

Teeth tell a tale, too. Along our evolutionary trek, human ancestors developed much smaller canine teeth, while chimps still sport the dagger-like teeth.

"Male chimpanzees have canine teeth much larger than female chimpanzees," Marks told LiveScience. "That difference doesn't exist in humans. We call our lawyers instead of bearing our canine teeth. And women can call their lawyers just as readily as men can."

Even still, activist Stibbe says the legal standing is the only way to ensure the chimp's survival.

"In his home in the African jungle, he would have been well able to look after himself without a guardian," Stibbe said. "But since he was abducted into an alien environment, traumatized and locked up in an enclosure, it did become necessary for me to act on his behalf to secure the donation money for him and to avoid his deportation."

Marks disputes Stibbe's statement, saying that in nature chimps do have guardians, or other chimps to watch their backs. "That's ridiculous. Chimpanzees are very social creatures," Marks said. "One of the other tragedies of this chimpanzee is it seems to have grown up largely in isolation from other chimpanzees."

If Matthew the chimp were declared a person, scientists foresee it would open a messy can of worms.

"In general, I don't think that it's a good idea to grant chimpanzees legal human rights," Mitani said. "Chimpanzees are well-known to kill each other. What would we do to perpetrators of those 'crimes?'"

And what about other animals, like dogs and dolphins: A chimp-is-a-person ruling could trigger similar court cases in support of non-human animals getting human status, said Brosnan and other anthropologists.