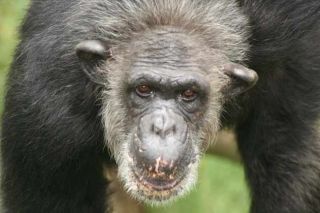 Chimps don't like bartering things, even when they're trading up. These new findings could shed light on the mysterious origins of bartering in humans, scientists added.
(Image: © Sarah Brosnan)

Chimps don't like bartering things, even when they're trading up.

This new finding could shed light on the mysterious origins of bartering in humans, scientists say.

Researchers investigated the circumstances under which chimpanzees would exchange one highly valued commodity for another — say, an apple slice for a grape. These are the first experiments to explore such barter with humanity's closest living relatives.

The chimps often did not spontaneously barter food items, but needed to be trained to engage in such barter. They proved willing to trade if they could trade something they did not like much, such as carrots, for something they liked a lot, such as grapes.

However, even after the apes had learned to perform food barters with reliable human trading partners, they were in general loath to conduct extreme deals in which a very good commodity, such as apple slices, had to be sacrificed to get even more preferred items, grapes.

"This reluctance to trade appears to be deeply ingrained in the chimpanzee psyche," said researcher Sarah Brosnan, a primatologist at Georgia State University in Atlanta. "They're perfectly capable of barter, but they don't do so in a way which will maximize their outcomes."

There was one chimp, Judy, who did stand out as an exception among the 14 tested when it came to grasping barter.

"The first time we gave her a packet of cucumbers, she ate almost all of them, but then exchanged one or two and saw she got grapes back on a one-for-one basis," Brosnan recalled. "The next time she got cucumbers, she opened up the packet, gave a look, wrapped it back up and pushed it back over and got grapes. This happened for the next nine times."

As the researchers tested roughly equal numbers of males and females, this standout case does not seem linked to sex, although there are often differences in behavior between the sexes in chimps.

Behind the behavior: Apes lack reliable ways in the wild to enforce deals and punish individuals that cheat trading partners by running off with both commodities. In nature, the chimpanzees also lack norms of ownership regarding property — they do not store property and thus would have few chances to trade commodities.

Nevertheless, as past studies have demonstrated, chimpanzees do possess highly active service economies. For instance, they trade grooming for sex or support. Chimps even trade services for meat or fruit, a commodity, "but it appears they haven't gone to a sense of full-out bartering with commodities," Brosnan said.

Intriguingly, prior research found chimpanzees are willing to trade tokens for highly valued commodities, roughly equivalent to the use of money to buy things. Tokens do not exist in nature and lack inherent value, so these new findings suggest a chimp's willingness to trade a token for a highly valued commodity such as a grape may say little about chimpanzee behavior outside the lab.

For millennia, people have relied on the barter of commodities as a key aspect of life. It allows specialized professions, as one person gives up some of what he or she has produced to exchange with somebody else for something different. In this way, both individuals can end up better off.

"Chimpanzees can and do trade services with each other. As chimpanzee societies demonstrate, however, a service economy does not lead to the same degree of economic specialization that we observe among humans," said researcher Mark Grady, Director of UCLA's Center for Law and Economics.

Despite the importance of such barter, little is known about how it evolved and developed.

"These findings help us understand the evolution of barter," Brosnan told Live Science. "This suggests the last common ancestor between humans and chimpanzees didn't have a good sense of barter either."

The scientists detailed their findings online Jan. 30 in the journal PLoS ONE.