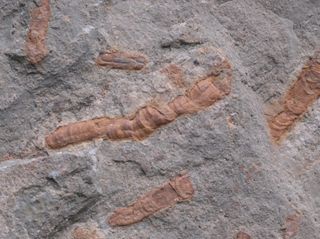 Fool's gold helps explain why many fossils of soft-bodied animals that lived more than 540 million years ago still survive, a new study finds.

The bacterial breakdown of ancient, wormlike animals after their deaths led to the formation of pyrite, the shiny, yellow mineral sometimes mistaken for gold. This pyrite helped preserve the fossils in three dimensions, according to research published Wednesday (Dec. 17) in the journal Nature Communications.

Understanding this strange process is important, said study researcher James Schiffbauer, a paleobiologist at the University of Missouri, because the process of pyrite mineralization could create features that, misleadingly, look like the original biology of the animal. [Extreme Life on Earth: 8 Bizarre Creatures]

"What we're trying to do is, look at the biological signal and subtract the geological noise," Schiffbauer said.

At the Gaojiashan fossil site in China, the tubelike fossils of an animal known as Conotubus hemiannulatus are common discoveries. The creature dates back to about 550 million to 542 million years ago.

"We actually don't have any fossil evidence of what that animal was," Schiffbauer said. "Looking at the tube, we can say it's probably wormlike or maybe sea-anemone-like."

In many ways, though, it's a miracle that even the fossil tube survives. Early animals like C. hemiannulatus did not have mineralized bones like dinosaurs or other later animals, whose fossilized skeletons reveal much about the animals' anatomies. As such, the fossilization process of soft-tissue animals is poorly understood, Schiffbauer said.

He and his colleagues studied C. hemiannulatus fossils, drawing on the observation that many are surrounded by shiny pyrite. They measured the size of the pyrite crystals and also the isotopes of sulfur in the pyrite, which is made of iron and sulfur. Isotopes are atoms of an element that have varying numbers of neutrons in the nucleus.

These measurements revealed that the pyrite mineralization of the tubes started outside, where the crystals were smallest, and worked its way in. The isotopic fingerprints of the sulfur revealed that bacteria were responsible, at least at first.

From the chemistry, the researchers pieced together the process as well as they could. It worked like this: First, the animals were rapidly buried, probably by a big event like a storm that brought a mass of sediment to their seafloor environment. This sudden burial prevented oxygen-loving aerobic bacteria from decomposing the bodies too rapidly to allow for fossilization.

Below the surface, though, lived sulfur-breathing bacteria that found the soft organisms to be an appealing feast. Fueled by the carbon in the wormy animals, these bacteria converted sulfate from the seawater into hydrosulfide. That hydrosulfide reacted with free iron in the water, which kick-started the formation of pyrite at the edges of the tubes. This process probably happened quickly, perhaps within 12 to 800 years, the researchers reported.

Most likely, Schiffbauer said, the pyritization process continued without the assistance of bacteria as the fossils were buried further.

The explanation helps to solve the mystery of why about 80 percent of the fossils in the Gaojiashan formation are preserved in three dimensions, with fool's gold around them, while others are preserved in two dimensions in a second process called carbonaceous compression. It seems that, as long as sediments didn't continue to bury the fossils too quickly, the pyrite process could continue. If the fossils buried faster, the compression process took over, creating pancake-flat fossils instead of fossils in three dimensions.