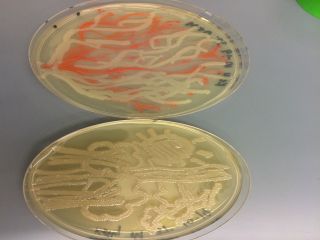 After a few days the bacteria grew and made the artwork visible.
(Image: © Katayoun Chamany)

NEW YORK — These artworks are more lifelike than they seem.

Artists created their own masterpieces inside petri dishes using "paint" made of living bacteria in a workshop here on Sunday (Oct. 19), part of the Imagine Science Film Festival. Painters dipped brushes, toothpicks, stirring rods and beads into bacterial mixtures and painted the clear liquid across a jelly-like agar canvas.

The agar serves as a place for the bacteria to grow, acting in the same way for bacteria as soil does for plants. It's full of nutrients that bacteria need to grow. After a few days of incubation, the bacteria smeared on the agar canvases grew and changed color, making the artwork visible. [Research as Art: A Gallery of Scientific Beauty]

Katayoun Chamany, a biology professor at The New School for Liberal Arts in New York, led the workshop. She said the "paint" was made with naturally growing bacteria, including a harmless strain of E. coli that turned white, Chromobacterium violaceum that turned purple and bacteria called Serratia marcescens that turned shades of red, orange and pink. Serratia marcesens is sometimes called the "blood of Christ," because it can produce a deep red color, Chamany said.

Chamany used genetically modified bacteria to create green and blue paint. Green came from mixing the E. coli with a fluorescent gene from a jellyfish. Blue came from mixing E. coli and a beta-galactosidase gene, and artists had to use a special type of sugar-infused agar canvas to make sure the bacteria turned blue.

The canvases sat for three days after the workshop to give the bacteria time to grow. The thickness of the bacteria layers and the temperature of the container dictated what colors grew inside the petri dishes.

People in the workshop painted landscapes, flowers, portraits and geometrical designs. Painters could mix colors or use smears of antibiotic that prevent bacteria from growing to create negative space in their artwork.

The bacteria used during the workshop are more or less harmless to humans, but some are "opportunistic pathogens." This means they can infect someone who already has a weakened immune system due to being sick, stressed or tired.

All the bacteria were approved for a biosafety Level 2 lab. Higher biosafety level labs are designed to handle much more dangerous samples like Ebola. There are only a handful of these labs in the United States.