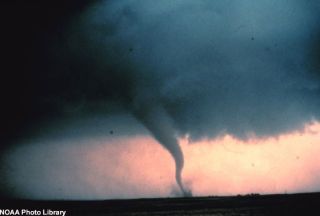 Atmospheric waves that ripple through clouds could spin up tornadoes when a thunderstorm gets in the way, new research shows. Tornadoes generally form in the late spring when warming temperatures make the air unstable (though they've been known to pop up at other times of the year). The classic tornado-forming scenario features a layer of warm, moist air trapped under a layer of cold, dry air. If this balance is upset, say by warming at the surface, the moist air rises, cools and forms clouds and thunderstorms. If the winds high up in the atmosphere are blowing in a different direction than those at the surface (a phenomenon called wind shear), the rising air can start to spin, and can sometimes give birth to a tornado. (The spinning system isn't called a tornado until it touches the ground.) Atmospheric waves, called gravity waves, can sometimes enter the equation and spin storms up even more. Gravity waves "are similar to waves on the surface of the ocean, but they roll through the air instead of the water," explained Tim Coleman of the National Space Science and Technology Center in Huntsville, Ala. "Gravity is what keeps them going. If you push water up and then it plops back down, it creates waves. It's the same with air." Gravity waves get started when some impulse disturbs the atmosphere. This impulse could be wind shear, a thunderstorm updraft or a sudden change in the jet stream, the narrow, fast-moving air current that flows from west to east across North America. When a gravity wave is created, it goes rippling out from the original disturbance like the ripples from a rock thrown into a pond. If the gravity wave encounters a thunderstorm on its way through the atmosphere, it can compress the thunderstorm's rotation, causing the storm to spin faster. (Imagine that proverbial figure skater pulling her arms in to spin faster on her skates.) "We've … seen at least one case of a tornado already on the ground (in Birmingham, Ala. On April 8, 1998) which may have become more intense as it interacted with a gravity wave" Coleman said. Coleman has developed a computer model that looks at gravity wave interactions with thunderstorms, and he and his boss Kevin Knupp are beginning to train meteorologists to look for gravity waves in real-time to improve forecasts.