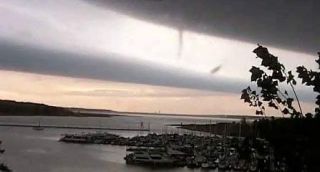 On a recent crisp autumn afternoon in Iowa, video cameras captured an unusual and visually dramatic result of two air masses colliding. Clouds split into a series of stripes and swept across the sky.

These so-called undular bores are created by atmospheric conditions that destabilize the air in a particular way. In the case of Des Moines, Iowa, they formed on Oct. 3 when a group of thunderstorms approached the city.

"At the time, a layer of cold, stable air was sitting on top of Des Moines," said atmospheric scientist Time Coleman of the National Space Science and Technology Center in Alabama. "The approaching storms disturbed the air, creating a ripple akin to what we see when we toss a stone into a pond."

A time-lapse video of the event shows just how strange it looked.

Undular bores are a type of gravity wave, one in which gravity is the force that pulls the wave down. Coleman likens the cloud waves to those created when a boat moves across the water.

"When a boat goes tearing across a lake, water in front of the boat is pushed upward," he explained. "Gravity pulls the water back down again and this sets up a wave."

The thunderstorms played the role of the boat in the skies over Des Moines in early October.

On radar images, the bores show up as bands denoting waves moving toward the radar and away from it. Coleman noted that residents of Des Moines actually felt the back-and-forth breeze as the waves traveled overhead.

"Flags flew one way during the crest of the wave and swung around 180 degrees to fly in the opposite direction during the trough," Coleman said.

The waves of undular bores typically measure 5 miles from peak to peak and race across the sky at 10 to 50 mph. Coleman estimates that one passes over any given point in the United States about once a month.

Undular bores can go on to form thunderstorms themselves.

"These waves churn up the atmosphere, causing instabilities that can initiate and sustain severe storms," Coleman said.

Of particular concern is the waves' ability to amplify tornadoes as they pass through the atmosphere, which is exactly what happened when an F5 (the strongest classification of tornado) struck right outside Birmingham, Alabama, in April 1998.

"At first the tornado was doing relatively little damage," Coleman recalled. "But our research shows that just before the tornado reached Birmingham, it was hit by an undular bore," causing it to spin up and increase in both intensity and size. The tornado went on to destroy more than 1,000 homes and businesses and caused $200 million in damage.