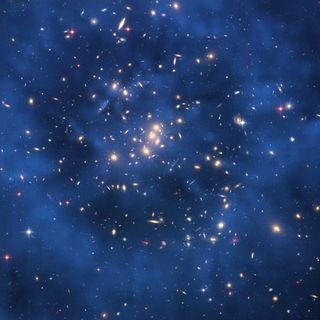 The Hubble Space Telescope captured this image of galaxy cluster ZwCl0024+1652, revealing a ghostly ring of dark matter floating within the cluster. Astronomers said the ring, which measures 2.6 million light-years across, may have been produced by a collision between two gigantic clusters. This image is considered one of the strongest pieces of evidence for the existence of dark matter.
(Image: © ESA/Hubble)

Dark matter may not be made of tiny particles as most scientists believe, but instead may consist of large chunks of strange matter anywhere from the size of an apple to an asteroid, researchers said.

Currently one of the greatest mysteries in science, the invisible substance called dark matter is thought to make up five-sixths of all matter in the universe. Yet no one knows what pieces of dark matter look like.

In a new study, researchers outlined their idea that dark matter is made of particles they called "Macros." The scientists theorized that if these particles were as dense as atomic nuclei, they could not be smaller than 0.12 pounds (55 grams). If they were, existing particle detectors would have already seen them. At the same time, Macros could not be larger than 2.2 billion trillion pounds (1 billion trillion kilograms), because then their gravitational field would be strong enough to warp starlight, a phenomenon that astronomers have not seen, either.

As for how these particles may have formed in the early universe, the researchers said. Back then, the cosmos was still extraordinarily hot, reaching temperatures of more than 6.3 trillion degrees Fahrenheit (3.5 trillion degrees Celsius), comparable to the temperature in the center of a massive supernova. Under these conditions, Macros could have assembled from particles called quarks, the more-basic particles that make up protons and neutrons.

Strange quarks ordinarily have extremely short lives, and so far scientists have only seen them within particle accelerators. However, neutrons are also highly unstable by themselves, but are stable when they are bound with protons in atoms, said Glenn Starkman, a co-author of the new report and a theoretical physicist at Case Western Reserve University in Cleveland. So, it could be that strange quarks created soon after the birth of the universe became bound to other particles to produce stable strange matter. And this might constitute dark matter.

Macros that were made when the universe began would be cold and dark now, the researchers said. [The 9 Biggest Unsolved Mysteries in Physics]

This new idea comes at a time when researchers are looking again at the possibility that dark matter is made of particles that scientists have already created and detected, as opposed to an exotic new particle.

The consensus among scientists right now is that dark matter particles interact very weakly, if at all, with the known forces within the universe. As such, dark matter is theorized to be invisible and nearly completely intangible, mostly only detectable via the gravitational pull it exerts.

However, for the past three decades, physicists have failed to find evidence for either proposition.

Scientists were especially intrigued by WIMPS, because the existence of such particles might confirm an idea known as supersymmetry theory, which in turn could help lead to a "theory of everything" that can explain all of the universe's known forces.

But while these suggestions were being looked at, the idea that dark matter was somewhere between ordinary and exotic "hasn't been completely neglected," said Starkman. "But it has been mostly relegated to the backwaters of the field, because people were so hopeful about supersymmetry and the prospects of it giving a WIMP dark matter candidate."

Now, researchers are investigating ideas about dark matter that may not require new physics to explain the existence of the mysterious substance. Macros are one such idea. The ideas fit within the Standard Model of particle physics, which is the best current description of the subatomic world.

"There is a big, wide window open for dark matter to emerge from the Standard Model," Starkman said.

The study on Macros also ruled out certain large masses for the objects. The scientists calculated that Macros could not weigh between 220 trillion and 220 quadrillion pounds (100 trillion and 100 quadrillion kg). If they were this size, Macros' gravitational fields would have distorted gamma rays from gamma ray bursts, the most powerful explosions in the universe, in ways that have not been seen.

In addition, if Macros are extremely high mass, they would only hit Earth about once every billion years, explaining why scientists have not yet detected the objects. If Macros are relatively low mass, although they might strike Earth more frequently, they might not leave any recognizable evidence, the researchers said.

It remains uncertain how researchers might detect Macros, if these objects exist. One way is to look for distortions in starlight and gamma rays that high-mass Macros might cause. Another is to look for tracks that relatively low-mass Macros could leave in rock, Starkman said.

Starkman and co-authors David Jacobs and Bryan Lynn submitted their findings to the journal Monthly Notices of the Royal Astronomical Society.