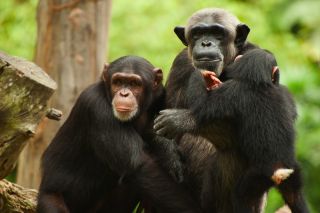 Human culture is remarkably varied, characterized by differences in religion, dress and social customs. Chimpanzees, humanity's closest living relatives, differ from group to group, too. But chimp culture is not nearly as complex as human culture.

Now, a new study hints at one reason why: Chimps just aren't as motivated to learn from one another as humans are.

"This study is new in showing a species difference in readiness to incorporate social information into one's own repertoire," study researcher Edwin van Leeuwen, a doctoral student at the Max Planck Institute for Psycholinguistics in the Netherlands, told Live Science. [8 Humanlike Behaviors of Primates]

Chimpanzees live in small groups, often near other chimp "tribes." These different groups do seem to have their own cultural traditions. For example, a 2012 study in Taï National Park in Côte d'Ivoire, found that three groups of chimps used different techniques for cracking nuts. These chimp groups interbred and intermingled, so the different tactics weren't genetic. Rather, they were likely passed down through social learning — the definition of culture.

Still, a different technique for cracking nuts is not as dramatic as completely different languages, religions, styles of dress, social mores or traditions. Humans seem unique in the ability to splinter from one another, and it's not clear why, van Leeuwen said. Chimps are not significantly more conservative than humans, and they're quite capable of imitating one another and learning about tool usefrom their social networks.

Perhaps, van Leeuwen and his colleagues thought, the difference between humans and chimps is not in capability, but in motivation. The researchers tested 23 German preschoolers and 14 chimpanzees, putting them both through almost identical experiments.

In each case, the researchers placed three cups on a table with a reward (a toy or treat) hidden under one of the cups. The child or chimp could pick only one cup to lift during each experimental run. In some cases, the children were able to watch other children pick up a cup before getting their turn; the chimps also sometimes got the chance to watch another chimpanzee take a turn first.

Results showed that both kids and chimps prefer to trust their own experience over that of their peers. But human children were more susceptible to the influence of another individual than were chimps. While chimps picked cups at random even after seeing another chimp find a reward, human children were more likely to search in a location where they saw another kid score a treat.

Most strikingly, van Leeuwen said, kids who saw another kid look at the cups but who hadn't had a chance to explore themselves relied almost entirely on that other child's behavior when they got the chance to pick a cup themselves. Chimps didn't.

"Although they observed another chimpanzee solving the task, chimpanzees used this information far less than children," van Leeuwen said.

The findings suggest that chimpanzees are less motivated by social information than humans, he said. This, in turn, could explain chimps' relative lack of culture; they just aren't as interested in learning from others. But more work remains, van Leeuwen added. The results might differ in group situations, or if a close relative versus a stranger provides the social information, for example.

The researchers reported their findings Tuesday (Nov. 11) in the journal Biology Letters.