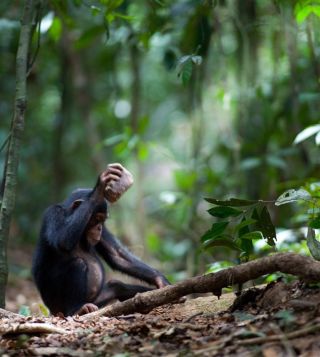 Like humans who might use a different slang term for "that's cool" or have distinct fashion sense, adjacent chimpanzee groups also show cultural differences, in this case, in their nut-cracking techniques, researchers have found.

"In humans, cultural differences are an essential part of what distinguishes neighboring groups that live in very similar environments," study researcher Lydia Luncz, of the Max Planck Institute for Evolutionary Anthropology in Germany, said in a statement.

"For the first time, a very similar situation has been found in wild chimpanzees living in the Taï National Park, Côte d'Ivoire, demonstrating that they share with us the ability for fine-scale cultural differentiation."

The researchers studied 45 chimpanzees from three different groups for the 2008, 2009 and 2010 nut-cracking seasons, as they use tools to open coula nuts from a tropical African tree of the same name. The chimps use hard "nutcrackers," which they craft from materials they find in their environment, to break the skin of these nuts against tree root "anvils." The nuts are hard at the beginning of the season, becoming softer and easier to crack open over time. [10 Animals That Use Tools]

Each of the three groups of chimpanzees in the national park ranges across about 1.5 square miles (4 square kilometers) of land, sharing a border with one of the other groups.

One of the groups used mostly nutcrackers made of stone to extract the meat from coula nuts, no matter how soft the nuts were. The other two groups started using wooden tools (which are easier to come by) to break open the nuts later in the season, using the stone tools only for the harder early-season nuts. All three communities had a special preference for how big of a hammer they used.

Interestingly, the chimpanzees from separate tribes are genetically the same, so they can and do interbreed between populations. In fact, the female chimpanzees of one group often move to mate with males from another group.

"We have documented differences in hammer choice within a single forest block, with members of three different adjacent chimpanzee communities that are in regular contact with one another and are thus not genetically differentiated," Luncz said.

Somehow, the females are able to adapt to their new culture's tool-use preferences; the researchers are currently studying these communities further to see how these females are able change the way they use tools.

"In many ways, chimpanzees are very similar to us humans," study researcher Christophe Boesch, also of the Max Planck Institute, said in a statement. "By studying the similarities to our closest living relatives in their natural habitat in Africa, we have the unique opportunity to learn more about the evolutionary roots of culture, which is for us humans one of the key elements of our identity."

The study was published today (May 10) in the journal Current Biology.