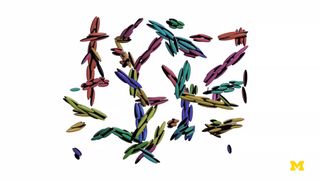 Chains of particles that could be used to create "muscles" for microscopic robots.
(Image: © University of Michigan | YouTube screengrab)

Tiny electrically activated "muscles" could one day give rise to microscopic robots that are smaller than a grain of sand, researchers say.

The chains of particles that make up these muscles could also lead to electronics that can automatically rewire themselves as desired, scientists added.

Microscopic robots, or microbots, could one day swim inside the body to fight disease or crawl into bombs to defuse them, among many other applications. "They could work together and go places that have never been possible before," said study co-author Michael Solomon, a chemical engineer at the University of Michigan at Ann Arbor. [The 6 Strangest Robots Ever Created]

However, building these robots and making them mobile remain two major challenges. "If you imagine a microscale robot in the future, it would need ways to move autonomously and it would need to be able to exert forces, by pushing or pulling on other objects," Solomon said.

The researchers started with spherical particles made up of a combination of polystyrene, the plastic material used in Styrofoam. They stretched these particles in a machine until they were the shape of rice grains, about 0.6 microns wide and 3 microns long. (In comparison, the average width of a human hair is about 100 microns.)

The scientists coated one side of each particle with gold. A particle with two different faces is known as a Janus particle, named after the two-faced Roman god Janus.

The gilded halves of the Janus particles attracted each other in salty water — the more salt in the water, the stronger the attraction. The ideal concentration of salt was about half that found in the sports drink Powerade, the researchers said.

On their own, the particles formed short chains of overlapping pairs, averaging about 50 to 60 particles per chain. However, when exposed to an alternating electric current, the chains elongated, seeming to add new particles indefinitely.

By expanding and contracting, these fibers could work like little muscles, said study co-author Sharon Glotzer, a computational physicist and chemical engineer at the University of Michigan at Ann Arbor. "We have extended and retracted them many times," Solomon said. "The degree of control we have over the chains is exciting."

"The findings point the way toward a new class of reconfigurable materials made of micron-size particles — materials that can be triggered to morph and change shape in response to changes in environment or on demand," Glotzer told Live Science.

The scientists found that gold plating and alternating electric current could make the chains extend by about 36 percent.

Although the force generated by the fibers is about 1,000 times weaker than human muscle tissue per unit area, it may be enough for microbots. "The next step is to organize groups of these chains into bundles," Solomon said. "If we can get the chains to swarm together, we can get them to lift loads, move around, do things that biological muscles do."

Microbots powered by muscles are likely many years away, but in the meantime, the Janus particles could lead to electronics that rewire themselves on demand, the researchers said.

"These chains are essentially wires, so you could assemble them into a circuit for reconfigurable electronics," Solomon said in a statement.