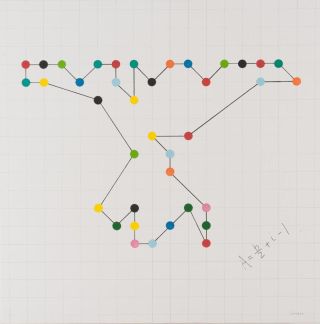 NEW YORK — In an art gallery in Lower Manhattan hangs a collection of paintings that any math geek can appreciate.

On one canvas, polyhedrons line up against a blue-gray backdrop, their vertices pointing toward a deeper meaning. On a brick wall, a white flag plays host to a group of orange circles, arranged in a seemingly random pattern. Only the perfect roundness of the shapes suggests there may be order to the chaos.

The paintings are the works of Nelson Saiers, a former hedge-fund manager who recently stepped down from his position in the finance world to pursue a career as an artist. As his artwork suggests, Saiers is something of a math whiz. When he was 23 years old, he earned his Ph.D. in mathematics from the University of Virginia, where he studied a kind of abstract algebra called algebraic topology. [See more photos of the math-inspired paintings]

Saiers' first exhibition opened yesterday (Nov. 5) here at Studio Vendome, a gallery in Manhattan's SoHo neighborhood. In addition to the underlying mathematical concepts that give meaning to each painting, the artist's explanations of his work are filled with allusions to the fields of science, space exploration and mythology.

"A scientist or a mathematician is a person who sees truth in a very simple, almost random form," Saiers told Live Science. "Take Isaac Newton. He's sitting outside his mom's house, drinking tea, and an apple falls. Most people wouldn't notice it, but Isaac Newton drops everything and spends the next year of his life wrestling with why the apple always falls to the Earth. And why doesn't the moon fall to the Earth?"

Like Newton, who figures heavily into Saiers' paintings (albeit in decidedly abstract ways), circles appear everywhere in the artist's work. Circles take the form of colorful dots floating in space in unfamiliar patterns. But these colorful dots have a message: They spell out words in Braille, the tactile writing system used by the blind and visually impaired.

Saiers said he uses Braille for a number of reasons. For one, it's a symbol of what he believes is U.S. society's blindness to world issues, such as genocide and insufficient access to clean water. But Braille also embodies his work as a whole; it's a simple collection of shapes that represents something much more complex — a whole world of ideas. Packing these little circles of meaning onto a square canvas has a deeper meaning too, according to Saiers.

"There's a famous problem in mathematics from the Greeks called squaring the circle," Saiers said. "It's the idea of trying to form a square that has the same area as a given circle, using only a compass and a straight edge. It turns out, this problem is impossible. So when I see a circle and square on the same canvas, I immediately see dissonance." [The 11 Most Beautiful Mathematical Equations]

This dissonance is highlighted in one of the first paintings in the gallery, titled "Tang," which features a series of large, orange circles that spell out the word "peace" in Braille. The word is mounted on a rectangular white flag, a classic symbol of surrender.

Peace, white flag — it sounds pretty straightforward. But Saiers went on to explain the hidden meaning behind this painting. It turns out that the white flag was inspired by the American flag astronauts planted on the surface of the moon during the Apollo 11 mission in 1969. The flag has since been bleached white by the sun and likely has been torn to shreds by the harsh lunar environment, Saiers said.

In addition to the phenomenon of gravity, the Apollo 11 mission and the movement of the moon around the Earth, Saiers' work pays homage to President John F. Kennedy, Apollo astronaut Buzz Aldrin, and scientists Galileo Galilei and Isaac Newton.

These people, places and ideas are all connected in Saiers' brain. Somehow, they all came together to make something happen, and that something was the historic moon landing, he said. But what does the moon landing have to do with peace, the centerpiece of the painting? The answer, Saiers said, has to do with dissonance. The collaborative achievement of landing on the moon has been accomplished; world peace has not.

"There are a lot of things we're kind of blind to, that if we actually fought as a country — or as a world — to end them, we could make some real progress. And one of those things is world peace," Saiers said. If the world devoted its time and energy to figuring out the big issues, the same way Newton devoted time and energy to figuring out gravity, maybe we could actually have peace on Earth or clean water for everyone, he suggested.

Saiers' exhibition, titled "Blindfolded in Gravity's Shadow," will be on display at Studio Vendome in New York until Dec. 1.

Editor's Note: This story was updated to correct a quotation from the artist about squaring a circle.