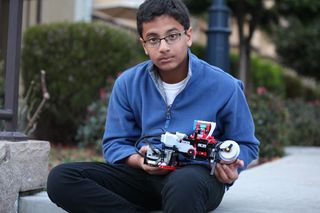 A 12-year-old student from California has created a Braille printer by repurposing parts from a Lego set.

Shubham Banerjee, a seventh-grade student from Santa Clara, Calif., developed the Braille printer using toy construction Lego pieces. The low-cost invention could be an accessible solution for blind and disadvantaged people across the globe, Banerjee said.

The printer, dubbed Braigo (short for Braille with Lego), was created from the Lego Mindstorms EV3 set, which retails for $349. Banerjee also added $5-worth of additional materials, which means the finished product costs about $350. This makes Braigo much more affordable than other Braille printers, which can retail for more than $2,000, according to Banerjee. [10 Inventions That Changed the World]

The innovative youngster developed Braigo to prove it is feasible to make an inexpensive Braille printer, he said. Banerjee now plans to make the project open-source, by releasing the design free-of-charge to the online community.

"I'll make this Braille printer and make the steps and the program software open to the Internet, so anyone who has a set can make it," Banerjee said in a YouTube video about the Braigo project.

The printer is programmed to produce the letters "A" through "Z" in Braille. It takes roughly seven seconds to print each letter, according to Banerjee. In a video uploaded to YouTube, Banerjee demonstrates how to print the letter "Y," and then shows how simple it is to combine letters to form words, like "cat."

"This is so easy even my little sister can do it," he said.

Enhancements can be made to the printer's software, and Banerjee said he now plans to program Braigo to print the numbers one to 10.

The Lego Group has already voiced their praise for the project, tweeting: "We're very proud. Impressive work for a great cause!"

An estimated 285 million people are visually impaired worldwide, and 90 percent of these individuals live in developing countries, according to the World Health Organization. An inexpensive Braille printer could bring affordable, 21st-century computing to millions of people facing visual impairment, Banerjee said.