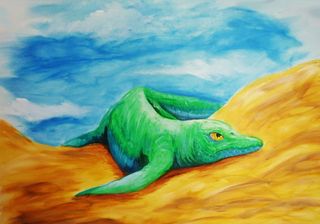 An artist's reconstruction of the oldest basal ichthyosauriform, Cartorhynchus lenticarpus, found in Chaohu, Anhui Province, China. The creature may be a missing link between ichthyosaurs and their terrestrial ancestors.
(Image: © Mr. Stefano Broccoli (Milano) created this image.)

A 248-million-year-old fossil of an ancient reptile found in China is the oldest known member of a well-known group of marine reptiles, and may have lived both on land and in the sea.

The specimen is a primitive type of ichthyopterygian, a group related to ichthyosaurs, which are large marine reptiles that dominated the world's oceans after the Permian-Triassic extinction. In that event, which occurred 252 million years ago, up to 96 percent of marine animals and 70 percent of land animals went extinct. The recently discovered fossil provides new evidence that ichthyosaurs evolved from creatures that lived on land, researchers say.

"This new animal is a link between the terrestrial ancestor and the ichthyosaurs fully adapted to a life in the sea," said Da-yong Jiang, a geologist at Peking University in China and leader of the study published today (Nov. 5) in the journal Nature. [Image Gallery: Photos Reveal Prehistoric Sea Monster]

Ichthyosaurs, whose name is Greek for "fish lizard," lived from about 248 million to 95 million years ago. The group was extremely diverse, with body lengths ranging from less than 3.3 feet (1 meter) to more than 66 feet (20 m).

Until now, all known ichthyosaur fossils came from animals that lived exclusively in the ocean, and there was a huge gap in the fossil record between them and their ancestors, Jiang told Live Science in an email. Scientists didn't know whether their ancestors were reptiles or amphibians, and if they lived on land or not.

The new species found by Jiang and his team, which they named "Cartorhynchus lenticarpus," is the smallest known ichthyosaur-type creature — only about 1.3 feet (0.4 m) long. The researchers said they suspect the animal is fully grown, but cannot rule out the possibility that the fossil is the remains of an immature form of a larger creature.

Unlike other ichthyosaurs, the new specimen has unusually large flippers that probably limited its ability to get around on land, making it resemble a modern seal. It also has a short snout and body trunk, like other land reptiles, the researchers said.

The animal was probably a suction feeder on the seafloor, and may have eaten worms or eel-like creatures called conodonts, Jiang said.

"The fossil is quite complete and well-preserved," Jiang said. In fact, only part of the animal's tail is missing.

The researchers found the fossil during an excavation at Chaohu, in South China, in 2011. During the dig, they found several skeletons of primitive ichthyosaurs and extinct aquatic reptiles called sauropterygians, as well as fishes and other creatures.

Jiang and his colleagues have been doing excavations in South China since 2002, looking for the first ichthyosaur that "jumped into the sea," he said, so the new find "is a milestone after our hard work for more than 10 years."