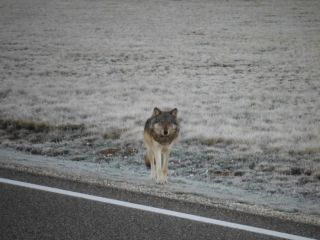 A wayward gray wolf has been spotted several times this month around the North Rim of Grand Canyon National Park, according to conservationists.

The wolf, which is wearing an inactive radio collar, could be the first of its species to roam Arizona in 70 years; gray wolves were exterminated from the state in the 1940s.

Federal authorities are investigating the sightings. Representatives from the U.S. Fish and Wildlife Service (FWS) said they are trying to confirm whether the animal is actually a wolf or a "wolf-dog hybrid" by collecting a feces sample. [In Photos: The Fight Over Gray Wolves' Endangered Status]

The animal doesn't appear to be a hybrid, at least in photos taken by observers, but the possibility can't be ruled out until a genetic test is conducted, said Michael Robinson, a wolf advocate with the Center for Biological Diversity, a nonprofit environmental group based in Tucson.

"Until more is known about this animal, visitors to the area are cautioned that this may be a wolf from the northern Rocky Mountain population and [is] fully protected under the Endangered Species Act," FWS representatives said in a statement.

If the wolf did indeed come from the northern Rocky Mountain population, it would have traveled across hundreds of miles to get to northern Arizona; the southernmost breeding population of gray wolves in the Rockies lives just south of Yellowstone National Park in Wyoming, Robinson said.

Gray wolves once lived across most of the continental United States, but the predators were aggressively hunted and sometimes killed for bounties through the early 20th century. By the mid-20th century, the only places gray wolves could be found below the Canadian border were a sliver of land in northern Minnesota and Michigan's Isle Royale.

The species was then protected under the Endangered Species Act in the 1970s. Conservation efforts and reintroduction programs helped gray wolves return to parts of their range. There are now more than 5,000 gray wolves in the continental United States, primarily in the western Great Lakes states of Michigan, Minnesota and Wisconsin, and the northern Rocky Mountain states of Idaho, Montana and Wyoming, as well as eastern Oregon and Washington.

A small population of Mexican wolves (a subspecies of gray wolves) has also been reintroduced to parts of Arizona and New Mexico. The gray wolf spotted in Grand Canyon National Park does not appear to be a Mexican wolf, because its body is bulkier and its ears are more compact than those of a typical Mexican wolf, Robinson said.

The sightings of the Grand Canyon gray wolf are reminiscent of another recent episode involving a wandering male wolf, OR-7, also known as Journey. OR-7 rose to fame in 2012 after he left his pack in Oregon to go to California, becoming the first known wolf in the state in 87 years. Since then, the wolf (which is tracked by a radio collar) has gone back and forth between Oregon and California several times. As of this summer, he was raising his first puppies with a mate.

OR-7's travels raised hopes that California could once again be home to wild wolves. Similarly, the lone wolf in Arizona is an encouraging sign that it's possible for the species to make a comeback in the remote lands around the Grand Canyon.

Unfortunately, many roving wolf stories don't have happy endings. When wildlife officials find out about a wolf that has ventured outside its usual territory, it's often because the creature has been shot or found dead, Robinson said. Last year, coyote hunters shot and killed wolves in Missouri and Kansas. A wolf that wandered from Montana to Colorado in 2009 was killed by poison.

The U.S. Fish and Wildlife Service has put forth a proposal to take gray wolves off the Endangered Species List, claiming that recovery goals have been met for the animals. Earlier this year, an independent peer review concluded that there is wide disagreement about some of the science the agency used to support the proposal. Some biologists and conservationists have voiced concern that delisting the wolves would prevent the species from recolonizing other states and leave the animals vulnerable to unsustainable hunting policies. FWS officials were expected to make a final ruling on the embattled proposal by the end of the year.