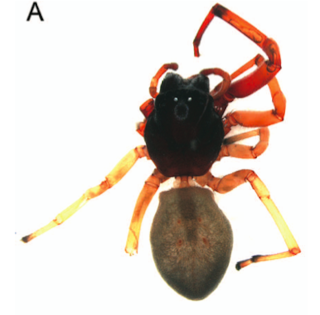 A close-up of the broad-faced sac spider involved in the recent envenomation in Connecticut. The spider’s body is a gray color with red-hued legs.
(Image: © C.R. Vossbrinck/CT Dpt. of Environmental Sciences)

Wandering around the windowsills and kitchen floors of New England is a common spider with a surprisingly nasty bite. In a new report, scientists identified the broad-faced sac spider — a frequent intruder in New England homes in the autumn — as the culprit in a recent envenomation of a woman in Connecticut.

This news might come as a surprise to New Englanders who didn't think this local spider's bite had any effect on humans. However, Yankees shouldn't be too alarmed. The 50-year-old woman who sustained the spider bite didn't suffer any serious side effects, according to the case study, published in September in the Journal of Medical Entomology.

The victim was reportedly standing in her kitchen, when she felt pain in her leg. She later described the bite as feeling "like the sting of a wasp," said Charles Vossbrinck, one of the co-authors of the report and a scientist at the Connecticut Agricultural Experiment Station, a part of the state's Department of Environmental Sciences, in New Haven. The site of the bite became red and slightly swollen almost immediately. But by the following day, the swelling around the bite had gone down, and the woman didn't require medical attention. [5 Spooky Spider Myths Busted]

Luckily for scientists who study Connecticut's spiders, the bite victim used a broom to retrieve the fanged culprit from under a kitchen cabinet. She brought the specimen to the Connecticut Department of Environmental Sciences, where Vossbrinck identified it as a broad-faced sac spider (Trachelas tranquillus).

"This is a hunting spider. There are hunting spiders, and then there are those that rely mostly on a web to catch prey," Vossbrinck told Live Science. This means that the broad-faced sac spider is prone to wandering around looking for food, and it may have crawled up the woman's leg while it was taking a stroll through her kitchen, he added.

But the broad-faced spider isn't native to New England kitchens. Most of the time, it prefers the great outdoors, where it can typically be found outside of buildings under siding and on windowsills, as well as at the base of plants, on fences, inside rolled leaves and under stones and boards, according to the College of Agricultural Sciences at Pennsylvania State University.

But because T. tranquillus tends to hang around buildings, there's a chance New Englanders might see these spiders indoors, as well. Connecticut locals typically report seeing the spiders in their homes in the autumn, Vossbrinck said. And T. tranquillus, as well asits cousins that belong to the genus Cheiracanthium, are among the most common spiders found in houses in Boston, according to the case report.

Although the bite victim in this most recent case didn't require medical attention, the first confirmed case of envenomation by the broad-faced sac spider in Connecticut — which occurred in 1969 — suggests that medical attention may be necessary in some instances. In that case, a 23-year-old woman was bitten by one of these spidersand needed antibiotics after the bite became infected. The new case is only the second confirmed case of envenomation by T. tranquillus, the authors noted.

But if you happen to get bitten by a broad-faced sac spider this fall, don't panic. Simply monitor the bite for any sign of infection or necrosis (death of the skin cells around the bite), Vossbrinck said. You should also try to capture the spider that bit you, in case you do need to see a doctor. In general, however, the pain from this spider's bite subsides on its own, and redness disappears within a day, he added.

There are only three species of spiders in the United States that are recognized by the Centers for Disease Control and Prevention as having venom that can be dangerous to humans: black widow spiders (Latrodectus), brown recluse spiders (Loxosceles reclusa) and hobo spiders (Tegenaria agrestis). However, researchers have recently cast doubt on whether hobo spiders, which are found mainly in the Pacific Northwest, are truly venomous.