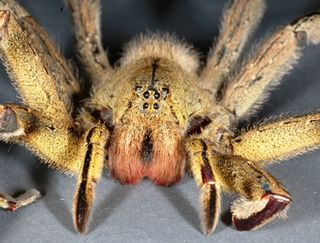 Brazilian wandering spiders are highly venomous, but most people bitten by these spiders survive with only mild to moderate symptoms of envenomation.
(Image: © Richard Vetter/UC Riverside)

It's enough to make you do a double take the next time you unpack your groceries! A recent British news report claimed that imported bananas could play host to a certain species of venomous spiders.

A woman in Essex, England, recently discovered that a bunch of bananas delivered to her home by a local grocer was infested with spider eggs. Pest control was called and reportedly identified the eggs as those belonging to the "immense and deadly" Brazilian wandering spider, according to MSN New Zealand.

But don't let this eerie tale come between you and your favorite fruit. It's unlikely that the woman's bananas were truly infested with deadly spider eggs, said Richard Vetter, a retired research associate of entomology at the University of California, Riverside. [Creepy, Crawly & Incredible: Photos of Spiders]

There are several reasons why fruit lovers should think twice before believing stories about scary spiders found in the produce aisle, Vetter told Live Science. For one thing, in this particular case, no spider was found hanging around the bananas, making it nearly impossible to know what kind of spider (if there even was a spider) had laid the enigmatic eggs.

"Egg sacks are much harder to identify than spiders. To identify them, you need familiarity with the spider first, then the egg sack," Vetter said. It's unlikely that British exterminators would be intimately familiar with the egg sacks of spiders from South and Central America, he added.

However, it is possible that the eggs in question belonged to an arachnid, Vetter said. There are several genera of spider that sometimes survive the long trip from banana-producing nations — such as Brazil, Mexico, Nicaragua and Costa Rica — to other parts of the world. Among them are Phoneutria and Cupiennius, two types of spiders that are commonly known as wandering spiders.

Wandering spiders are named for their tendency to wander around looking for food instead of spinning a web. As nocturnal hunters, both Phoneutria and Cupiennius sometimes seek out shelter during the day under the broad leaves of banana trees. And because of their preference for these fruit trees, species of both genera at times wind up in grocery stores and residences in Europe and North America, Vetter said.

Typically, when one of these big, hairy spiders shows up overseas, it automatically gets labeled as a "deadly" Brazilian wandering spider without anyone identifying what genus or species the spider belongs to, Vetter said. And that's a shame, he said, because only one of the two genera of  wandering spiders, Phoneutria, contains species that could actually pose a threat to humans. The other genus, Cupiennius, contains some big, but totally harmless, spiders.

"There are 12 species of Phoneutria, which are found mostly in South America, including the eastern coast of Brazil. A small number of them also go into Costa Rica," Vetter said. However, few of these spiders pose a significant risk to humans, he added.

Still, there is a type of Brazilian wandering spider, called Phoneutria fera, that is widely considered to be the most dangerous spider on Earth. The species lives in the middle of the Amazon rainforest, far from banana-producing areas. While it isn't impossible for this spider to find its way to England or other foreign nations inside a banana crate, it's highly unlikely, Vetter said.

There are also two other species of Phoneutria commonly labeled as "deadly" — P. nigriventer and P. keyserlingi. These spiders live on the eastern coast of Brazil, near centers of banana production, but their reputations as deadly pests are greatly exaggerated, Vetter said.

"Somebody did a study in Eastern Brazil back in 2000 that looked at 422 Brazilian wandering spider bites. The only people to die from the bites were two small children," Vetter said. The adult victims of this notorious arachnid experienced either mild symptoms or no symptoms at all, he said.

And there's one other fact that makes the recent British report seem unlikely. Brazilian wandering spiders are only found in Brazil, and the country consumes most of its banana crop domestically, Vetter said.

"I don’t know where England gets its bananas from, but Brazil does not export many bananas," Vetter said. If the bananas in question came from Ecuador — the world's largest exporter of bananas — or any other banana-producing nation, then those eggs didn't belong to one of the "deadly" species of Brazilian wandering spiders, he added.