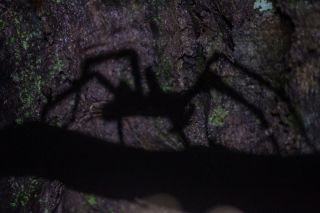 WASHINGTON — A Brazilian spider delivers more than a painful bite that sends most victims to the hospital. Its venom stimulates an hours-long erection. Now scientists have figured out the chemical that seems to be responsible for the penis boost. In Brazil, emergency room staff can immediately spot the victims of a bite from the Brazilian wandering spider (Phoneutria nigriventer). Patients not only experience overall pain and an increase in blood pressure, they also sport an uncomfortable erection.

"The erection is a side effect that everybody who gets stung by this spider will experience along with the pain and discomfort," said study team member Romulo Leite of the Medical College of Georgia. "We're hoping eventually this will end up in the development of real drugs for the treatment of erectile dysfunction."

The research was presented here at a poster session at the American Physiological Society (APS) annual meeting.

Kenia Pedrosa Nunes of the Medical College Georgia, Leite and colleagues separated the different components of the spider venom and ran tests on rats to eek out the erectile enhancer. Dubbed Tx2-6, the compound turned out to be a relatively short string of amino acids called a peptide.

Then, they injected the venom-chemical into rats stimulated to begin an erection. A tiny needle-like device inserted into each rat’s penis measured the pressure change, which corresponds with the increase in blood flow to the blood vessels inside the penis. Compared with control rats, those injected with the peptide showed a significant increase in penis pressure.

The scientists also found an increase in nitric oxide within the two main cylindrical cavities that run the length of the penis and are called corpora cavernosa.

The significance of the nitric oxide is clear when the science behind an erection is considered: The brain senses sexual arousal in the body and certain neurons produce nitric oxide, a message telling the body to get started in making an erection. A cascade of biochemical steps occurs, one of which includes the production of an enzyme dubbed cGMP. This enzyme causes the smooth muscles of the penis’ two cylinders to relax so that blood can rush in and fill up the now expandable tubes. (A human penis can hold about 10 times more blood when erect compared with its non-erect state.)

"All of this leads to vaso-dilation of vessels that go through the penis and also relaxation of those [cylindrical tube muscles]," Leite told LiveScience. "They need to relax so the blood will come inside and that’s how you get an erection, because the blood gets trapped into the penis."

But erections don't last forever. The erectile party crasher, a substance called PDE-5 breaks down the cGMP and in turn transforms the erect penis into its normal limp state.

The most popular erectile-dysfunction drugs—Viagra, Cialis and Levtra—work by blocking this party crasher.

The spider chemical works in a different manner, affecting an earlier step in the erection process. Somehow, the toxin ups the amount of nitric oxide, which sort of sets into motion an erection. The scientists suggest that a combination of a synthetic version of the spider venom with a drug like Viagra would result in a magnified effect.

"So the combination of the two drugs could be even more efficient in patients that don’t respond well to Viagra," Leite said.